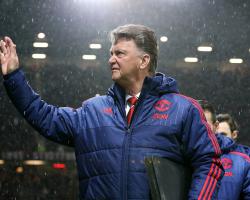 Van Gaal's future as United boss will be thrown into question again on Tuesday if his team fail to win at Newcastle.

United ended an eight-match winless run by defeating Swansea 10 days ago and then followed that victory up with another triumph in the FA Cup against Sheffield United.

Those wins have merely papered over the cracks, however

The pressure is still on Van Gaal because of the often dull and uninspiring performances of his team.

Paul Scholes branded United's style of play "boring" earlier this season and following Saturday's 1-0 victory over League One opposition, the former club great claimed both Van Gaal and his players looked "bored" during the third round tie.

Van Gaal has been at odds with Scholes for much of his 18-month spell at the club, but on Monday the 64-year-old conceded some of the football on display at Old Trafford this season has been rather dull.

"There are matches that I have enjoyed," Van Gaal said.

"And there are also matches where I'm very bored or angry because we are not disorganising our opponent's defence but that is football."

So why, after spending over a quarter of a billion pounds on new players, can Van Gaal not inspire his team to perform well on a regular basis?

Is it because he refuses to come to the touchline in matches to bark orders at his players like Sir Alex Ferguson did?

"I'm not Sir Alex, as you know," said Van Gaal, who has rarely come to the touchline to speak to his players during his spell at the club.

"It's very difficult because of the noise.

"A lot of managers are (yelling from the sidelines) but I doubt if they have real influence."

He even offered the theory that traffic could have been to blame for the exodus by scores of supporters before Wayne Rooney's 93rd minute penalty on Saturday.

''They are not thinking that we would score, I think, and maybe also because of the traffic," he said.

Giggs has rarely been allowed to speak in public since he became Van Gaal's assistant, so his thoughts on Scholes' criticism of his boss are unknown.

"No," was the flat answer when Van Gaal was asked whether Giggs ever discusses Scholes' criticism of the club.

The Dutchman insists the former winger, who symbolised United's attacking traditions with his playing style, does have serious input when it comes to the team's current tactics, though.

"He has a lot of influence in our decisions because I communicate every decision with my staff so he can have a big influence," Van Gaal said.

"I work in a fantastic way with Ryan so that's the only thing I can say but when you want to hear something about his feelings according to what Paul Scholes or Gary Neville are saying, you have to ask him."