Cult legend Ole Gunnar Solskjaer heads into his first full season as manager, with a vital pre-season now under his belt after taking over the job in middle of the last campaign.

There are new faces and a new style of play that is more like the United way of old, but the project has still really only just begun.

Here's a look at everything you need to know... United's 2018/19 season can be broken into three fairly separate chunks. There was the decidedly poor first half under Jose Mourinho that led to the Portuguese's sacking in December after a run of one win in six games and a much talked about toxic atmosphere.

Then came the bounce with Solskjaer as caretaker boss, resulting in eight consecutive wins in all competitions, eight straight away wins, a 12-game Premier League unbeaten streak, and a Premier League for most points (25) in a manager's first nine games in charge.

In stark contrast to that, United then won just two of their final 12 games in all competitions and the season concluding with a 0-0 draw against Huddersfield and a home defeat by Cardiff. Player attitudes were seriously questioned, but fitness was just as much of an issue after Solskjaer had demanded a tactical shift that the players simply weren't prepared for. 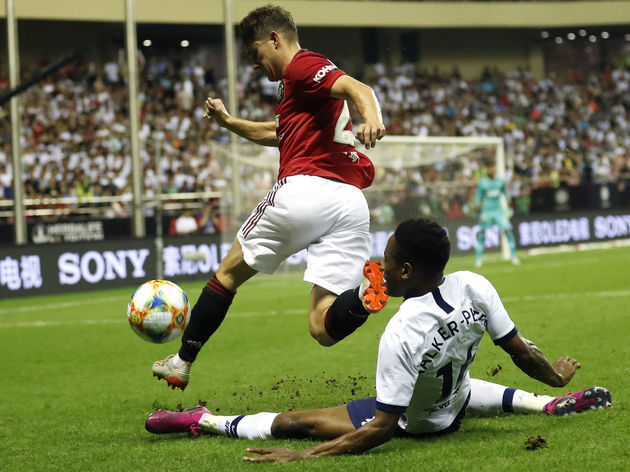 As a result of the way last season finished, pre-season was always going to be vital for Solskjaer and fitness-oriented sessions made up the bulk of the early training.

It looked to have had an impact on the pre-season tour of Australia and Asia as players looked far sharper, pressing high, attacking with pace and hitting opponents on the counter.

United enjoyed 2-0 and 4-0 wins over Perth Glory and Leeds respectively, before playing Inter off the pitch in a 1-0 victory in China, and scoring early bragging rights by beating Tottenham.

United struggled to break down Kristiansund in a homecoming game for Solskjaer in Norway, but still prevailed 1-0 after a late penalty, while a final friendly against AC Milan in Cardiff finished 2-2, with United going on to win the tie in a penalty shootout.

The transfer window was mixed for United. The club had a clear plan after the wasteful scatter graph approach of recent years and moved for Daniel James (£15m) and Aaron Wan-Bissaka (£45m) early, both young domestic players intended as long-term solutions to known weakness.

The £80m Harry Maguire deal took until August to complete, but the England star was again targeted for similar reasons and improves what was a shamefully poor defence last season.

Fans were hoping for more, particularly in midfield. Late deals for Paulo Dybala and Christian Eriksen were called off, while there was never serious interest in Bruno Fernandes.

United wanted to sign players who could specifically improve the team and were interested in the long-term project. Faced with pressure to buy, club officials stuck by their guns as signing the wrong players would arguably have been more damaging than doing nothing.

United released Antonio Valencia after 10 years of service, with the veteran winger/full-back returning home to Ecuador with LDU Quito. Ander Herrera also left as a free agent after failing to agree a new contract and joined Paris Saint-Germain.

Romelu Lukaku made clear his intention to leave and was sold to Inter in a deal worth £73m, with Solskjaer ​explaining that the Belgian wasn't replaced in order to allow Greenwood to develop. After leaking 54 goals in 38 Premier League games last season (bad), the defence suddenly looks much stronger following the summer arrivals of Wan-Bissaka and Maguire, the latter of whom is expected to emerge as a dressing room leader and potential future captain. Goalkeeper David de Gea has also agreed a new contract to stay with the club.

The most exciting part of the team though, as seen in pre-season, is in attacking areas. The pace that United have, especially with the addition of James, is frightening, and pressing high up the pitch this season will create chances to score. This team also looks devastating on the break.

James has been criticised for a lack of final ball quality, but his speed, particularly when pressuring opposing defenders in their own half, is already an invaluable weapon. United will get a lot of chances this season from that kind of play alone. United have lost Marouane Fellaini and Ander Herrera from midfield since January and replaced neither. Solskjaer has plans for Scott McTominay and Andreas Pereira - the former had a brilliant pre-season and looks physically stronger and more confident than before. But Nemanja Matic continues to go backwards and a lot will depend on where Paul Pogba plays... There is no question that Paul Pogba is head and shoulders above the rest of the United squad in terms of quality and he will once more be vital to the club this season after finishing the 2018/19 campaign as both top scorer and leading assister.

Crucially, United managed to keep the Frenchman out of the clutches of Real Madrid, despite Pogba publicly admitting he would like a 'new challenge' at the start of the summer. What's more, his attitude since then has being hugely refreshing, especially when compared to Lukaku, and Solskjaer has spoken about it more than once in a very positive manner.

His favoured position is as the attacking option in a midfield trio. It is where he has most attacking impact and least defensive responsibilities, and it could work as a system with McTominay and Matic behind him. But a lack of depth might lead to Pogba having to sit deeper. Make no mistake, United aren't going to mount a Premier League title challenge this season. It is an overdue long-term project, the first of this type since Sir Alex Ferguson retired six years ago, and the immediate objective is gradual improvement and a return to the top four.

That is easier said than done, but the three summer buys have made a difference, while the emergence of promising youngsters also makes United better than they were. De Gea committing his future and Pogba staying for at least one more season is even better.

United may not have the depth and experience for too many competitions this season, so fourth place in the Premier League has to be a priority over European progression. Perhaps a domestic cup run is also feasible and would at least partially quench the thirst for silverware.