Man Utd cool on other options 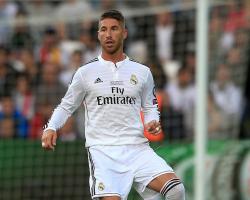 After claims Ramos wanted out of Real Madrid, United offered to swap David de Gea for the 29-year-old defender.

However, it has become increasingly apparent in recent weeks that proposal will not be accepted, with Real Madrid manager Rafael Benitez recently stating he was "100 per cent" sure Ramos would stay.

The former Sevilla defender has captained Madrid on their pre-season tour following the departure of long-standing skipper Iker Casillas and reports in Spain claim Ramos is close to agreeing a new deal with the 10-time European champions.

Nicolas Otamendi has been viewed as a possible alternative for United should Ramos decide to stay at Real Madrid, but Press Association Sport understands manager Louis van Gaal has no interest in the Valencia centre-back.

It is understood that Van Gaal would be happy to go into the new season without another centre-half if the Ramos move does not come off.

Sources at United point out that the club had the fourth best defensive record in the Barclays Premier League last year, although De Gea's excellent form was key to that record.

It is understood that Van Gaal is happy with his options at centre-back and there is a feeling that the defence will be better protected this year given that the United boss intends on using two holding midfielders as part of a 4-2-3-1 formation.

Van Gaal also has Chris Smalling, Marcos Rojo, Paddy McNair and Tyler Blackett as well as Jonny Evans, who may stay at the club despite speculation he will leave.

"Bayern Munich have (Franck) Ribery and (Arjen) Robben, Chelsea - they have (Eden) Hazard and Willian - speed and creativity

Manchester United fans want us to compete with these teams

Barcelona have Neymar and (Lionel) Messi

(Ashley) Young has made a fantastic season

(Juan) Mata the same, with assists and goals but to win the Champions League we need speed also

"That is why I think, maybe, we still have to buy a player with speed and creativity.''