​Manchester United midfielder Paul Pogba was caught up in a heated exchange with fans at Old Trafford following the final day defeat to Cardiff City.

Despite recording the greatest ever statistical season of his career to date, with 16 goals and 11 assists (earning himself a spot in the PFA Team of the Year in the process), Pogba has had a tumultuous season at United, including public spats with Jose Mourinho and a perceived lack of focus on the club.

All this came to a head on Sunday after the nightmarish 2-0 defeat to Neil Warnock's side at the supposed 'Theatre of Dreams'. As the players concluded their customary lap of honour around the ground upon the culmination of the season, some fans seized the moment to chastise the Frenchman, calling for boss Ole Gunnar Solskjaer to 'sort him out'.

@paulpogba verbal altercation with fan at the end of the #MUFC game. pic.twitter.com/HyrluedlMA

A video posted on Twitter shows the dispute, with a couple of fans angrily calling for the Norwegian to sort the star out, before turning their attention to the topless ​Pogba, and demanding him to 'have some respect, have some f***ing respect' before calling him 'f***ing sh*t'.

And, while it's hard to discern, it appears some other fans are calling for the manager to sell the 26-year-old this summer, following the continued links with both ​Barcelona and ​Real Madrid throughout this season.

While we will have to wait for the summer transfer window to see if that comes to fruition, Solskjaer has had no qualms in showing his disappointment with his players after a disastrous end to the season, which has seen them pick up just two points from their last five games, and one point from two clashes against teams who had already been relegated in Huddersfield and the Bluebirds. 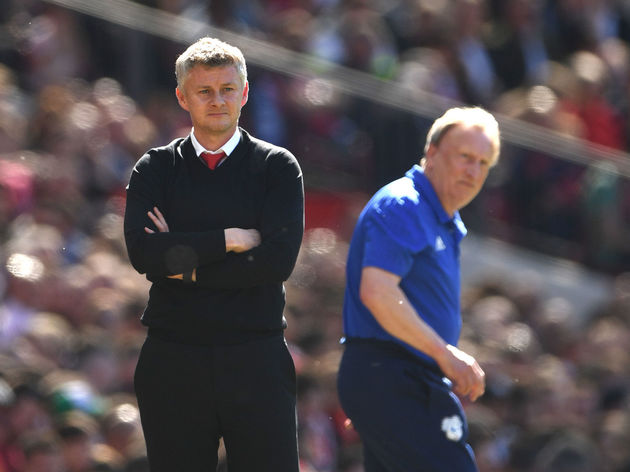 As reported by the ​Sun, Solskjaer has cancelled the usual end-of-season debrief that was scheduled for Monday morning, instead instructing his players to begin their summer breaks immediately, apparently causing some unrest with players who had geared holidays around the meeting and those who wanted say goodbye to stars moving for pastures new.