On 10 April 2007, vintage Fergie kicked into gear. The opponents were AS Roma, who were having one of their best seasons in recent history under Luciano Spalletti. The visitors took a 2-1 lead to Old Trafford and boasted a phenomenal defensive record for the season, having only conceded 23 goals in Serie A up to that night.

The pre-match predictions were all centred around ​Wayne Rooney’s away goal from the first leg, and how United would do well to nick a 1-0 win. However, a 22-year-old Portuguese winger had very different ideas of how the game was going to go. Despite Francesco Totti going close in the early stages, it was United who grabbed the game by the scruff of the neck. They bagged three goals between the 11th and 19th minute of the game, effectively ending proceedings before they really began.

Firstly, Cristiano Ronaldo squared the ball from the right flank for Michael Carrick to chip goalkeeper Doni from about 30 yards out to open the scoring. ​United then made a mockery of Roma's defending with a five pass move that went from centre-back to the opposition net in under 10 seconds, finished by Alan Smith (who scored his first goal since returning from a leg break). The contest was then seemingly put to bed by Rooney once he finished a Ryan Giggs cross, after Ronaldo had skilfully taken on the Roma midfield to create the chance.

Most sides would have been happy with a 4-2 aggregate advantage and eased off, but United weren’t 'most sides'. Before half-time, Ronaldo capped off a wonderful first half display by tying Christian Chivu in knots and smashing the ball home emphatically.

It was more of the same after the restart. Ronaldo added his second after 49 minutes from a Giggs cross. With the game beginning to resemble more of a training exercise, Carrick bagged his second, which was somehow even better than his first. The only blemish on a near perfect night for the Red Devils came after 69 minutes, when Totti whipped a cross for De Rossi to score arguably the goal of the night - a twisting volley from a very awkward position. Although, any slim (really slim) chance of a mad comeback was dashed when Patrice Evra got in on the act with 10 minutes to go, and United were through to the ​Champions League semi-finals - their first since 2002. United ran riot over the 90 minutes, turning a very good Roma side into a laughing stock. The performance, however, was a great example of how Ferguson was always able to get the absolute best out of his players.

While Rooney, Ronaldo and Carrick may have stolen the headlines, the performance of Darren Fletcher was just as important. Fletcher had one job the whole game - stop prime Totti from playing his own game.

Fletcher dominated him that night though, and without their talisman to call on, Roma fell flat throughout the whole team. Fletchers performance allowed Carrick to play with more freedom, which in turn allowed United to cut loose up front and the Italian defence couldn’t cope. It just goes to show how important Fletcher was, that the one occasion Totti managed to break free of the Scot, Roma scored. The Portuguese is currently the Champions League’s all time leading goalscorer with 128 to his name. It’s hard to believe that his goal on 44 minutes in his 31st match was the first he scored in the competition proper.

This was Ronaldo’s breakout season. After threatening to be a great player but sometimes reverting to a frustrating one-trick pony for the previous three years, he stepped up a gear, bagging 23 goals in all competitions.

On a night when United needed a star, ​Ronaldo became one. Roma were having a great season up to that point. They were doing great in ​Serie A and they were taking a 2-1 lead into the second leg of the Champions League quarter finals. Plus, they were doing it with a mad tactic that nobody believed would work.

That was the thing, though - the 4-6-0 tactic that Spalletti concocted truly had its limitations exposed at Old Trafford. The formation had worked brilliantly up to that point. It placed Totti at the focal point of the team in a false nine position which allowed him freedom to influence the game, and landed him his best scoring season.

But Fletcher marked Totti out of the game. That was that. While Doni may be more familiar to fans of Liverpool for being Pepe Reina’s backup keeper for a season, he was at one point among the best goalkeepers in Serie A. This game, however was not one of his finest nights.

To be fair to Doni, he didn’t have much of a chance against some of the best forwards in the world when his defence more resembled a freshly cooked shepherd's pie than a solid unit. That, however, doesn’t excuse the fact he was chipped from 30 yards, failed to deal with two crosses into his six yard box, and was beaten from range at his near post by Evra.

What Aged the Worst In all honesty, there wasn't much nonsense from either club from here on in. Although, o

Take Evra and Solskjaer away and you’re left with Kieran Richardson, Thomas Kuszczak, Craig Cathcart, Chris Eagles, and the Dong Fangzhuo. The fact that Richardson is probably the most successful of that quintet is quite something.

What Aged the Best Does it even need saying? Ronaldo began the campaign as public enemy number one in England after his part in Rooney’s sending off at the World Cup. But his telepathic understanding with Rooney made him a superstar, picking up the goalscoring void left by Ruud van Nistelrooy’s departure.

Ronaldo went one better the following season scoring 42 goals in all competitions as he led United to win the Champions League and picked up his first Ballon d’Or. 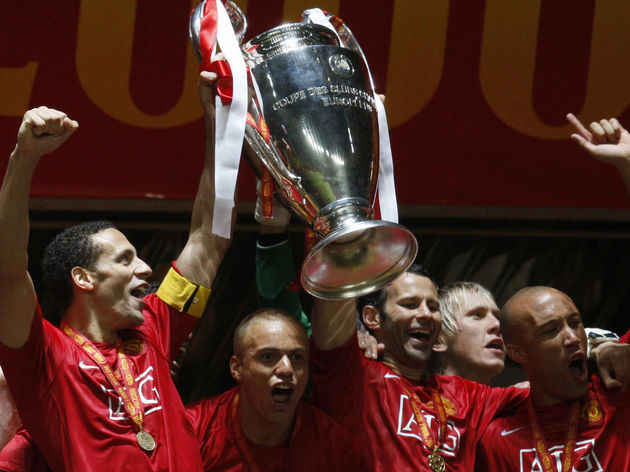 Man Utd were soundly beaten in the semi-final by eventual winners Milan. It wasn’t all bad though, as they did manage to win the ​Premier League for the time since 2003.

They also went one better in Europe by beating Chelsea in a famous penalty shootout in Moscow a season later, then making it three league titles in a row in 2009.

Roma proved that the night at Old Trafford was simply a one off by going on to win the Coppa Italia, and a few weeks later being the only reason Inter didn’t finish the domestic season unbeaten.