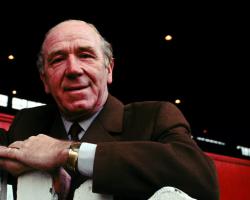 The club's annual statement of accounts from 1969, a copy of which has been obtained by the Press Association, showed that United paid out ÃÂ£204,028 in 'wages and bonus' to players such as Denis Law, Sir Bobby Charlton and George Best

That is estimated to equate to around ÃÂ£3million today - which is 1.5 per cent of ÃÂ£203million, the figure listed in United's financial report for 2014-15 under staff costs.

The 1969 document features various indicators of just how much finance in football has changed over the years, with the difference in broadcast revenue unsurprisingly marked

United had 'washing and cleaning' expenses of ÃÂ£1,915 - a figure greater than that listed under 'TV Fees received from League', which stood at ÃÂ£1,334.

The club also made almost 10 times the TV amount through sales of their programmes, with that figure coming in at ÃÂ£13,248.

In an age of mega-money TV deals, United's broadcast revenue in their 2015 report was ÃÂ£107.7million.

Their latest figure for commercial revenue was even bigger - ÃÂ£169.9million.

And while there is no direct comparison that can be made in 1969 on that front, United did have a category under incomings listed as 'Use of Ground, Catering Rights, Advertising, TV Facilities etc', with the total standing at ÃÂ£11,206 (ÃÂ£166,000 in today's money).

With regard to matchdays, the total income from gate and programme receipts combined was ÃÂ£556,878 (ÃÂ£8.3million in today's money)

United's matchday revenue was listed as ÃÂ£90.6million in 2015 after a season in which the average attendance was over 75,000.

Duncan Drasdo, chief executive of Manchester United Supporters' Trust, told Press Association Sport: "I wouldn't really criticise the players today (with regard to what they earn) because it is relative to what other clubs are offering.

"To supporters, of course, the numbers are crazy.

"But people in other areas of sport and entertainment earn huge amounts of money and I'm not quite sure why footballers get singled out for criticism.

"If football was still amateur, I think you would still have players playing

Some might not - but I suspect a lot of the best players still would.

"I also don't think players in 1969 would have turned down the wages on offer today if they were offered them."

:: Updated equivalents for 1969 figures calculated via inflation calculator at www.bankofengland.co.uk