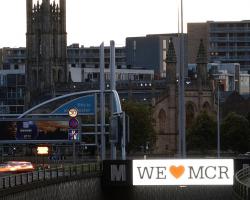 Players will wear black armbands and wear shirts with the name of their respective cities on the back - as Barcelona's first team did against Real Betis earlier this month - on Saturday as a mark of respect for the victims of the attacks in Manchester in May and in Barcelona and Cambrils earlier this month.

A minute's silence will be held with a message of support being displayed on the digital boards surrounding the pitch.

"Manchester is no stranger to the devastating effects of terrorism and we can empathise with how difficult it must be for the Catalan people to recover from the recent attacks," said United Legends manager Bryan Robson.

"However, as two of the most iconic teams in world sport, we can use the power of football to bring people together.

"We must unite to show our strength, rally around our communities and stand up together against all forms of terrorism."