The Red Devils were frantically searching for a new forward late in the transfer window and were linked to countless different players before ultimately settling on a six-month loan deal for Shanghai Shenhua's Ighalo. 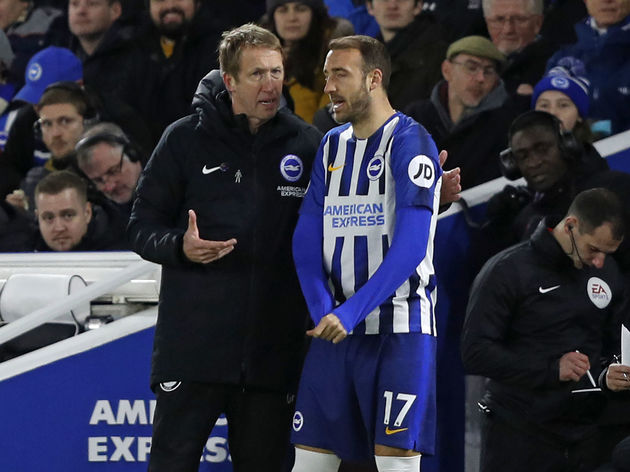 According to the ​Daily Mail, one player who found himself on ​United's radar is Murray, who was seen as a potential candidate because of his lack of game time at the Amex Stadium this season.

The 36-year-old has started just four ​Premier League games, three of which came in the first five games of the campaign, so it was believed ​Brighton might have been open to letting him go on a temporary basis.

Seen as a traditional out-and-out striker, Murray was viewed as the ideal candidate for the role at Old Trafford. United wanted a powerful presence to spearhead their attack and they felt as though Murray could be that man.

Given he is also a United fan, the Red Devils may have felt confident of being able to convince Murray, but the move ultimately failed to materialise and he ended up signing a new 18-month contract with Brighton.

Manager Graham Potter assured Murray that he still had a future at the club and negotiations over a new contract are thought to have been relatively straightforward.

United eventually turned to Ighalo, whose agent recently admitted that the whole transfer saga ​came as a surprise to him. The former ​Watford man has now arrived in England and could make his debut for the Red Devils after the winter break, when United travel to Stamford Bridge to face ​Chelsea in a match which could be crucial to both sides' chances of finishing in the top four.

With United currently six points behind the fourth-placed Blues, a defeat would leave them with lots of work to do to claw their way into ​Champions League qualification.