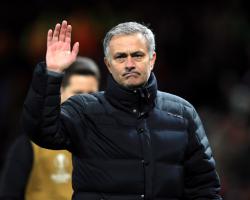 At a venue where they have drawn four successive Premier League games, United's territorial dominance for once translated into a comprehensive 4-1 victory that came courtesy of braces from Zlatan Ibrahimovic and the recalled Anthony Martial.

It was a success that came without Mourinho's prowling presence on the touchline following the news he had accepted a one-match ban for his antics in the fixture between these two clubs three days earlier.

And though he may not have seen the performance at close quarters, Mourinho declared himself pleased with the cup victory which sent United into a last-four meeting with Hull.

"I'm pleased with the goals because the performance is something we're used to," he said on Sky Sports 1.

"We're playing very, very well at home and today was more of the same

After their goal we had 10 minutes where we felt it deeply and the players on the pitch couldn't hide that because West Ham's first shot they equalised.

"But in the second half the team got again the confidence to play and we won comfortably playing beautiful attacking football, which is something the fans like but we need results.

Banned from the touchline and the dugout - for the second time this month - Mourinho was not seen in the Old Trafford directors' box either, though he revealed he was able to relay his thoughts to his coaching team.

Asked where he witnessed United's win, he replied: "It's a secret

"Yesterday (Tuesday) we worked really well and everybody was prepared

I'm really happy with the players."

Wherever he was, there were plenty of positives for Mourinho to draw upon, not least Martial's response to having been left out of the previous two United squads and a late cameo, the first of the season, for the popular Bastian Schweinsteiger.

Wayne Rooney was also bright, although his wait to equal Sir Bobby Charlton's all-time United of 249 goals will carry on until at least next week due to a suspension that will rule him out of the trip to Everton at the weekend.

The Liverpudlian may not be in Mourinho's thinking but Henrikh Mkhitaryan almost certainly will be after the Armenian playmaker once again caught the eye with two assists.

"Against Feyenoord we could think, 'Okay, it's a different profile of football' but against a typical Premier League team, Micky could perform this way

We are really happy

For West Ham boss Slaven Bilic, the root of their issues were easy to pinpoint as they conceded inside the opening three minutes in either half either side of an equaliser from Ashley Fletcher, a former United academy prospect.

"I'm very disappointed, they deserved it," said the Croatian.

"You can't have a slow start anywhere, especially not here because they're good anyway but when they're one up they hit on the counter attack, have amazing quality and are very direct and punish you.

"They could've scored a second one after the first but we defended and then came back into it.

"At half-time we said we couldn't allow them to do it again but it was exactly the same start in the second half.

You can't expect anything here when you have such a slow start to the game."