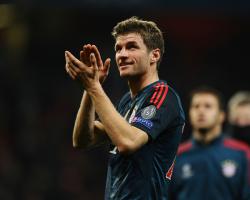 The two clubs have had dialogue this summer already, with United trying their luck with 30-year-old Bastian Schweinsteiger, and Bayern reportedly interested in British record signing Angel Di Maria.

However, the Old Trafford club have turned their attention to versatile forward Muller, with Sport1 reporting that United are willing to drop ÃÂ£58million for the players services

United will have been encouraged by recent reports that the 25-year-old has clashed with manager Pep Guardiola at a recent training session.

Muller's 'special' relationship with United boss Louis van Gaal has been well documented in the past, with van Gaal giving the German international his debut during his Bayern Munich tenure.

Muller has also recently stated it was 'an honour' to be linked with a club of Manchester United stature, although the player later stated in the same interview that he was happy at Bayern.