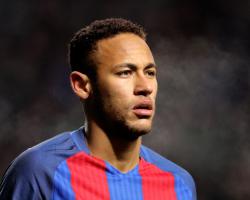 Manchester United want to sign NEYMAR in a ÃÂ£180million deal with the Brazilian said to be considering his future at Barcelona, the Daily Record reports.

But ANTHONY MARTIAL could be on his way out of Old Trafford with Paris St Germain interested, according to the Sun.

The Daily Telegraph reports that Leicester are closing in on a deal for Genk's ÃÂ£14million-rated defender WILFRED NDIDI.

According to the Daily Mail, Manchester United defender MARCOS ROJO is wanted by Bayer Leverkusen, while the Daily Mirror reports that DALEY BLIND also fears for his future at Old Trafford

Inter Milan and Juventus are interested in Tottenham's MOUSSA SISSOKO, who has failed to shine since joining for ÃÂ£30million from Newcastle, according to the Daily Mirror.