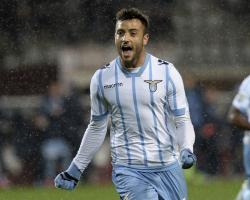 Brazil under-21 star Anderson hit the net twice in a 2-0 win away to Torino last week and took his league goals tally to nine for the season with a fourth-minute header in a 2-0 home win over Verona on Sunday.

Anderson should have had his second after the restart when he pounced on a poor midfield pass and ran half the length of the field before sending his drive off the crossbar.

The performance came under the watchful eyes of Manchester United's chief scout Jim Lawlor, according to a report in Tuttosport on Monday, suggesting the English Premier League giants are still tracking the Brazilian despite his recently extending his contract with Lazio.

Anderson played only 13 times last season, failing to score a single goal, but has come on leaps and bounds under new coach Stefano Pioli.

Lazio, who are making a late season push to qualify for next season's Champions League, tied the Brazilian to a new deal last week that will see him remain with the club until 2020.

"My story with Lazio is only just beginning," Anderson said.

"I'm really at home in Rome

Lazio has believed in my potential since the start and even my family is happy."

Roma's win at Cesena meant Lazio failed to leapfrog them into second place, but Anderson insists a third-place finish -- synonymous with a place in the Champions League qualifying stages -- is a real target for Lazio this season.

"I'm happy to have scored again and to have helped the team," he added

"We all believe we can finish in third place, we've said it since the start of the season

We have to keep on going one game at a time."