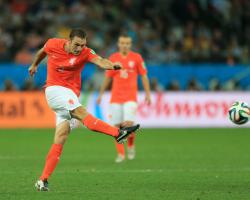 Italian reports from newspaper Carriere della Sera suggest that United are set to return to Lazio with improved offers for Anderson and De Vrij, after seeing initial bids rebuffed by the Serie A side.

The Red Devils 2-0 loss to Paris Saint-Germain early on Thursday morning reinforced the clubs need for defensive reinforcements, and De Vrij is now thought to be at the top of fellow Dutchman Louis van Gaal's shopping list.

United had an initial bid of ÃÂ£18million for the centre-half turned down, but will return with an improved offer as they look to bring in further additions ahead of their Premier League opener against Tottenham a week on Saturday.

The Manchester club will also up their bid for Brazilian attacking talent Felipe Anderson an ideal replacement for Paris bound Angel di Maria - after seeing a ÃÂ£24.5million offer rejected

The 22-year-old is highly rated in Italy and played a huge role in Lazio's return to the Champions League.

Louis van Gaal's side have already signed five players this summer Memphis Depay, Matteo Darmian, Bastian Schweinsteiger, Morgan Schneiderlin & Sergio Romero - with their current expenditure at around ÃÂ£75million, although Di Maria's sale would recoup around ÃÂ£45million of that.