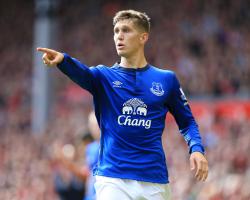 Chelsea, who have made two bids for Stones - both of which were rejected - had looked like the only possible destination for the 21-year-old defender should he leave Merseyside.

However, reports on Thursday suggested that United were now looking at hijacking the Blues deal for Stones as Louis van Gaal looks to sure up his fragile defence.

And now, fresh claims from English newspaper the Mirror report that United are willing to offer 27-year-old Jonny Evans as a sweetener in any potential deal.

Evans has fallen down the pecking order at Old Trafford and would be deemed surplus to requirements if another defender joined the club, so including the Northern Ireland international in a deal for Stones makes sense.

The inclusion of Evans may also give Everton an incentive to cash in on Stones, with the club likely to be ÃÂ£30million-plus richer with the added bonus of a title winning defender joining the clubs ranks.