​Manchester United have been tipped to go head to head with Real Madrid over the signing of Lille striker Victor Osimhen.

The 21-year-old has only been with Lille since last summer, but he has already turned heads with a number of impressive performances. He currently sits on 18 goals and six assists in all competitions, keeping Lille in the race for Champions League football in France. According to ​Le10Sport, ​United see Osimhen as a 'priority' signing ahead of next season, with Ole Gunnar Solskjaer desperate to combine him with ​Anthony Martial and ​Marcus Rashford to form a dynamic attack. Poor Daniel James doesn't even get a shout-out.

Thanks to his pace and power, Osimhen is tipped to be a success in the ​Premier League, but the potential cost of the deal would likely be a problem for United. Given he only signed last summer, he still has four years remaining on his current deal, so he would not come cheap.

Lille have a reputation for being open to selling their stars for the right price, having allowed Nicolas Pépé to move to ​Arsenal in a £72m deal last summer. However, if any team wants Osimhen, they may well have to fork out that kind of money again.

Whether United would spend that kind of money is unknown. It is thought that they have ​agreed to sign on-loan striker Odion Ighalo for £15m this summer, so signing fellow Nigerian Osimhen as well seems a bit of a stretch.

A switch to ​Madrid might make a little more sense. The 13-time European champions are said to be on the lookout for a new striker, with both

Borussia Dortmund's Erling Haala​nd is at the top of t​heir wish list, while the likes of ​Inter's Lautaro Martínez and RB Leipzig's Timo Werner are suggested as potential alternatives, but Osimhen could be an 'easier' option. 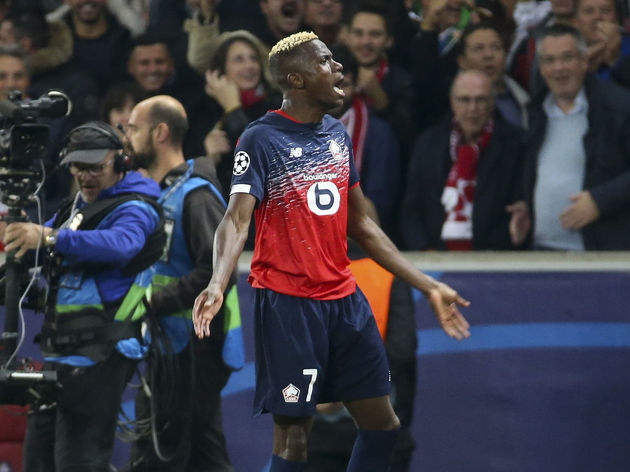 Le10Sport claim that Osimhen could be a replacement for ​Karim Benzema, but that's surely not the case. The Frenchman still bangs in goals for fun, so bringing in someone else alongside him is easily the better idea.

United's interest in the Nigerian is questionable, to say the least, so Real may have a free run at this one if they want.