​Manchester United host Liverpool at Old Trafford on Sunday for the next instalment of this fierce Premier League rivalry.

United are the country's form team under Ole Gunnar Solskjaer and will look to build on an impressive away win over Chelsea in the FA Cup, while Liverpool have the chance to go three points clear at the top of the table.

The Reds were held to a 0-0 stalemate against German giants Bayern Munich on Tuesday - ​Liverpool's third draw in four games.

Here's the combined XI we'd go for ahead of ​Sunday's clash.

Alisson and David de Gea are two of the division's best goalkeepers, which makes this a tough choice.

However, De Gea is arguably the best goalkeeper in the world and leaving him out here would be hugely controversial. The 20-year-old is a threat going forward with a wicked right foot, while Ashley Young doesn't have the legs he once did.

Alexander-Arnold recently missed three matches through injury and Liverpool only managed to win one of those games - the chaotic 4-3 victory over Crystal Palace - which shows how important the young full back is in both halves for Jurgen Klopp. An injury to Joe Gomez rules him out of what would be an all-Liverpool back four, so ​United's Lindelof gets the call-up.

The Sweden international has made 27 appearances this season and he's finally established himself as a regular at Old Trafford. ​The league's and possibly Europe's best centre back at the moment. Van Dijk is an absolute mountain at the back and has almost single-handedly solved Liverpool's defensive frailties since arriving at Anfield.

The Dutchman has superbly marshalled the tightest defence in the league, conceding just 15 goals in 26 matches. ​Another standout player in his position at domestic and European level, Robertson has enjoyed a phenomenal couple of years at Anfield and is a firm Kop favourite.

Luke Shaw has certainly improved this season but the Scotland captain is simply a level above. Every team would be lucky to have an Andy Robertson in their ranks. Herrera has grown into a leader at Old Trafford. A goal and an excellent performance in general against Chelsea on Monday has earned him high praise in Manchester and beyond.

The 29-year-old is the definition of 'nuisance' and his ability to press relentlessly and mark key players out of games is impressive. The sort of player you'd love to have on your team but would also be your most hated opponent.​ ​Wijnaldum's consistency in Liverpool's engine room puts him ahead of his United counterparts. The former Newcastle man can do everything that's required of a central midfielder and is strong across the broad.

Although he has only registered two goals this season, Wijnaldum is a threat for the opposition with his tenacious runs into the box. 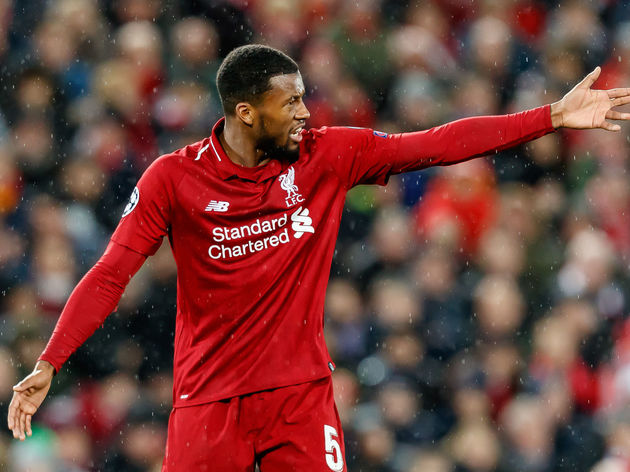 ​The most in-form player in the country. Pogba has played 12 games under Ole Gunnar Solskjaer, scoring nine goals and assisting six in that time.

He was everywhere on Monday as he orchestrated United's FA Cup win over Chelsea with an inch-perfect cross and powerful diving header. Pogba is finally becoming the superstar that United hoped they'd re-signed from Juventus for £89m. Undeniably one of the players of the season so far, Salah is the joint top scorer in the league alongside Manchester City's Sergio Aguero and is already adored on Merseyside.

The Egyptian led the Reds to the Champions League final last season but his performances this year have made their bid for the England's top flight title a reality.​ ​Rashford has also been on fire under the new management at Old Trafford, as he and Pogba have struck up quite the partnership. The 21-year-old has five goals in his last six league games and the pair have 14 goals between them under Solskjaer.

Rashford is into double figures for goals this season and has almost equalled his goal and assist haul for the whole of last season. ​Despite drawing a blank against Bayern Munich in the Champions League, Mane is still arguably Liverpool's form attacker.

The Senegal international has four goals in his last four league games and his battle with Ashley Young will be a fascinating plot point in what should be an action packed contest.