Manchester United vs Manchester City: Looking Back on the Last Five Derbies

​Manchester United host Manchester City on Wednesday evening, as the two sides contest a derby which could have huge ramifications in both the title race and the race for the top four.

With United and City both eliminated from the Champions League at the hands of Barcelona and Tottenham Hotspur respectively, both sides can now turn their full attention back to the league.

In City and Liverpool's pulsating fight for top spot, it seems that any dropped points between now and the end of the season would be fatal for either sides' hopes of lifting the Premier League trophy. Ole Gunnar Solskjaer on the other hand, will be desperate to atone for United's recent poor performances and make one last push for the top four.

We looked back at the last five Manchester derbies in the ​Premier League: ​Pep Guardiola's side were comfortable winners in the reverse fixture earlier this season, as they beat the Red Devils 3-1. The victory maintained ​City's unbeaten start to the campaign and effectively ended United's hopes of a title challenge, as the defeat left Jose Mourinho's men 12 points off the top spot and with a negative goal difference.

Goals early in each half from ​David Silva and ​Sergio Aguero gave City a 2-0 lead. ​Anthony Martial threatened to start a comeback for his side when he tucked away a penalty on the hour mark to make it 2-1. However, substitute Ilkay Gundogan finished a 44-pass move from close range to wrap up the points for the home side. City dominated the league in 2017/18 and had the opportunity to secure the title at home against ​United in April. Seemingly unstoppable at the time, the Citizens looked set to celebrate in what would have been a dream scenario for their fans.

Goals from ​Vincent Kompany and Gundogan in the first half had the home side on their way to a memorable victory. Mourinho's men had other ideas though, as they came out after the break to complete a stunning turnaround and come away from the Etihad Stadium with all three points.

Two goals in as many minutes from ​Paul Pogba and a volley from Chris Smalling produced one of the most stunning comebacks this fixture has ever seen. Although the title was too far out of their reach, the Red Devils were able to prevent City from lifting the trophy for a little while longer. When the two sides met halfway through last season, City This tie was billed beforehand as the play-off for the top four, but ended with both sides' hopes of achieving that in the balance. The goalless draw was fairly uninspiring throughout, as Mourinho employed his commonly-used tactic of shutting up shop away from home.

​Marouane Fellaini's headbutt on Aguero five minutes from the end earned him a red card, but the home side did not have enough time to take advantage. Despite registering their lowest possession stats in over a decade (31%), United managed to hang on for a point.

The Red Devils' boss came in for criticism following the game, as his team registered just one touch in the Man City penalty box throughout the entire 90 minutes. Mourinho was not too concerned however, as the draw 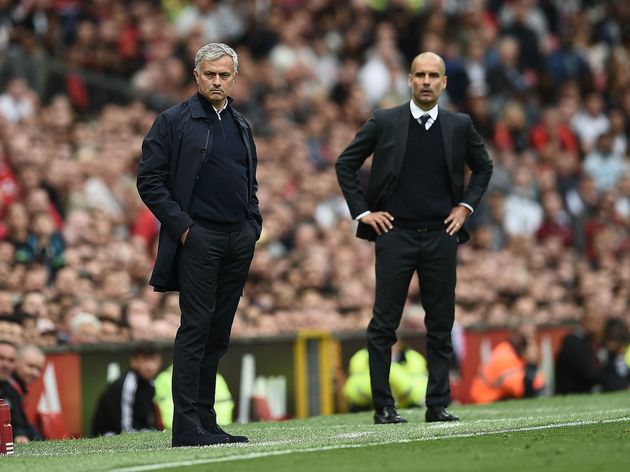 ​The first Manchester derby of the 2016/17 campaign saw the resurgence of the managerial rivalry between Mourinho and Guardiola. Having previously battled it out at La Liga when they managed Real Madrid and Barcelona, the 2016/17 season saw them finally come head to head in the Premier League.

Therefore, the first meeting between the two sides, which took place in September, was in every fan's calendar from the start of the season. And it was Guardiola who came out on top, as his City side ran out 2-1 winners. Zlatan Ibrahimovic pounced on a goalkeeping howler from ​Claudio Bravo, but it wasn't enough to inspire United to come back from the two goals scored by ​Kevin De Bruyne and