​As the excitement builds for the 44th Manchester derby on Wednesday night, Ole Gunnar Solskjaer will certainly have some selection decisions to ponder after his team's poor performance against Everton on Sunday.

As the Red Devils' injury list is unlikely to shorten, the Norwegian may be forced to play a similar squad as he did on the weekend, but will have to try and spark a much needed reaction amongst his players. However, with ​Manchester City's performances moving from strength to strength each week, the Norwegian manager will be cautious with his approach to the game as his side continue to strive for a ​Premier League top spot.

Here's a look at how Solskjaer's side could line up for ​Wednesday's clash. David de Gea (GK) - The Spain international has, surprisingly, not been at his best for the Red Devils as of late. Making a major mistake during their ​​Champions League clash with Barcelona, it is not a situation that ​Man Utd fans are accustomed to. In spite of this blip however, the 28-year old will still offer Solskjaer's side a great sense of experience come Wednesday.

Victor Lindelof (RB) - Despite not being at his best ​on the weekend, the Swedish defender has shown glimpses of his potential over the last two seasons. Played at right-back against Everton, if he gets the nod again he may be key to thwarting the attacks of ​Raheem Sterling.

Chris Smalling (CB) - The 29-year-old has struggled to play comfortably within the side this season, making only 22 appearances for the Red Devils. Although he has plenty of experience playing for United, the Englishman will have to improve if he wants to mark his name on the team sheet regularly next season.

Phil Jones (CB) - After being substituted at half-time on the weekend, the 27-year old may not be the most certain name on the team sheet, but he is an experienced one. With Solskjaer potentially taking him off to keep him fresh for Wednesday's affair, the veteran defender could certainly help fend off the likes of ​Sergio A​guero and ​Bernardo Silva.

Luke Shaw (LB) - Having missed Sunday's clash with Everton through suspension, the England international will be looking to take Ashley Young's shirt and help solidify Solskjaer's defence. Enjoying what is arguably his best season at the club, if his name is in the starting XI on Wednesday night, Man Utd fans will surely be boosted in confidence. 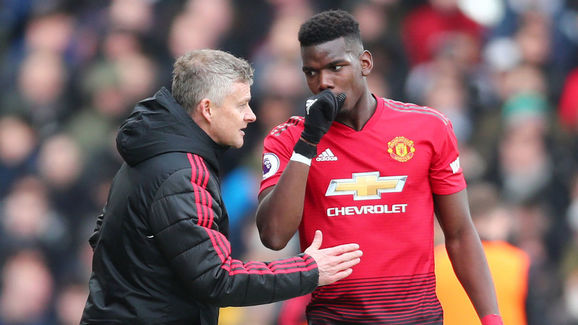 Paul Pogba (CM) - Although the Frenchman was performing excellently in Solskjaer's first few games in charge he seems to have gone missing as of late. The 2018 World Cup winner - who has scored 13 goals in the 2018/19 campaign - popped up with a brace against City last season, and will be hoping to reignite his form in front of the Old Trafford faithful.

Nemanja Matic (CM) - The former ​Chelsea man put in a decent performance on the weekend, and can offer Solskjaer a valuable, experienced mind in the middle of the park. After joining United from the London club last season, he has started for the side in most of their Premier League games.

Scott McTominay (CM) - The young Scottish midfielder has already demonstrated this season why he is such an impressive talent, picking up a goal in 13 Premier League appearances for the Red Devils. With a tackle success rate of 89% this season, he could be vital in closing down Manchester City's midfield creativity. Marcus Rashford (RW) - The England international burst on to the scene in the 2015/16 season, and made a real name for himself when he scored the only goal during a derby victory over Manchester City. Since then, he has been integral to the Red Devils' attacking setup, and looked the most likely to score for United on the weekend.