Marcus Rashford marked his 200th appearance for Manchester United with a breathtaking display.

United cruised past Norwich 4-0 in the Premier League, with Rashford bagging himself a brace in a routine win. The Englishman managed 13 goals and nine assists in 49 appearances last season, which many thought was a pretty good return, considering his age.

However, this campaign, he has already found the back of the net 19 times from just 30 appearances.

The 22-year-old may have had his critics in the early stages of the season, but he has gone on to silence them and is going from strength to strength.

Last time out, ​the Red Devils were comfortably swept aside in the Manchester derby, with rivals City cruising to a 3-1 win in the first leg of their Carabao Cup semi-final clash. United were outplayed and the score could have been worse, but they will go to the Etihad Stadium knowing that they are still in the tie - just.

The hosts were three goals down at half time but Rashford, who was captaining his boyhood club for the very first time, found the net in the second half to give Ole Gunnar Solskjaer's men hope. It was a clinical and instinctive finish, ruthlessly firing into the bottom corner. 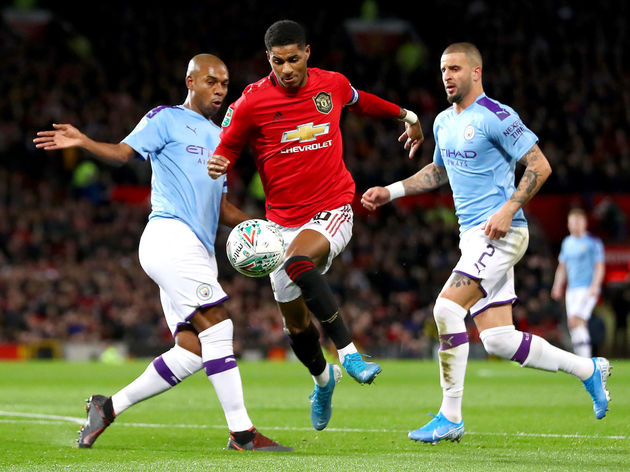 Against Norwich, Rashford was ​once again outstanding, carrying the ball forward at speed before bringing his teammates into the game. The Old Trafford crowd were treated to a truly world-class display, with his trickery and movement making him simply unplayable.

The attacker's performance once again highlighted just how much his game has improved and developed. With United struggling to break the Canaries down and get in behind, it appeared as though it would be another frustrating afternoon against so-called lesser opposition.

But when Juan Mata picked up the ball on 27 minutes, he looked up to see Rashford making an intelligent run to the back post. The Spaniard had the necessary quality to produce a wonderful cross, allowing the number ten to simply tap home. His awareness to make a late run, and anticipate where the ball was going to be, was just the latest example of his ever-improving instincts in front of goal.

Marcus Rashford has given United the lead in his 200th appearance for the club!

Alongside his goal, his overall positioning was excellent, picking up pockets of space that continued to trouble the Norwich defence. Rashford also showed the awareness to drift infield and create space for Brandon Williams to get forward - which he did to great effect.

In fact, the pair combined for the second goal, with the England international playing a sublime piercing pass through the heart of the away side's defence, which Williams latched onto before he was taken down by Tim Krul. Up stepped Rashford once more to make it 2-0 from the spot. He created it, and then he finished it.

His critics have previously pointed towards his inconsistency or his inability to make the right decisions at the right time, ultimately leading to a lack of confidence.

But it is a completely different story now. A truly stunning display to mark his 200th appearance for his boyhood club.