United have fallen to 12th place in the Premier League table after the latest round of fixtures, having taken a measly nine points from the first 24 on offer this campaign and winning only one of seven games since the opening weekend two months ago. 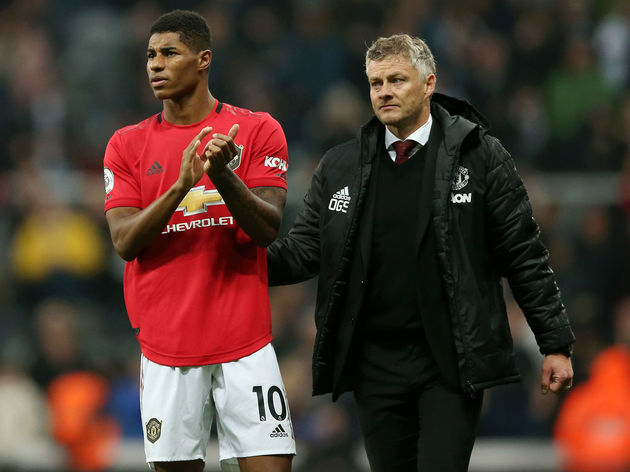 It is officially the club’s worst start to a season in the Premier League era, while eight consecutive away games without a win is their worst run on the road since September 1989.

Summer signing Harry Maguire recently deleted a tweet referring a 0-0 draw in the Europa League against AZ Alkmaar as a ‘point away from home’ in a seemingly positive frame, with some disgruntled fans accusing the £80m centre-back of accepting new lower standards.

But taking to Twitter to address the Newcastle result and a run that has now seen United take 14 points from the last 15 Premier League games stretching back to the start of April, Rashford attempted to reassure supporters that players are well aware of their responsibilities.

You can’t hide in football and the last few weeks simply haven’t been good enough.

As a United fan myself, that hurts. And you deserve better.

We know we need to improve and that is our sole focus as a team and as a club. pic.twitter.com/GyHgvQvxeM

“You can’t hide in football and the last few weeks simply haven’t been good enough,” he said.

“As a United fan myself, that hurts. And you deserve better. We know we need to improve and that is our sole focus as a team and as a club.”

Former United captain Gary Neville took aim at the club’s board after the final whistle at St. James’ Park, telling Sky Sports the Old Trafford hierarchy are ‘responsible for this’, highlighting ‘poor recruitment [and] poor selection of managers’ as a root cause of the current problems.

9 - Manchester United have picked up just nine points from their opening eight Premier League matches this season (W2 D3 L3), their worst start to a league season since 1989-90 (8 points) when they went on to finish 13th. Worrying. pic.twitter.com/oV2kDjRkri

“Manchester United are now getting the pain they deserve for poor decisions at board level and Ole Gunnar Solskjaer needs to make sure that the clean-up job he’s doing, which needs to be done for the mess that’s gone before him, that he gets the opportunity to spend the money the others have had to spend,” Neville commented.

“If Man United recruit well in the next three or four transfer windows, they’ve got the bones of something. If they recruit badly, they’ll end up suffering.”