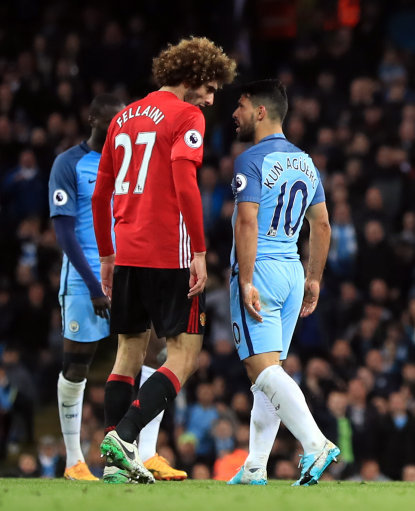 Fellaini's moment of madness - a clear butt on Aguero as the pair clashed following a trip by the Belgian - came six minutes from time in a tense stalemate that leaves City a point in front of their neighbours and in charge of the Champions League race.

Fellaini had been booked moments before for a trip on the City striker and was in wide-eyed and animated mood as he eventually left the pitch, a stunning denouement to a match the home side dominated without getting on the scoresheet.

Aguero came closer than anyone to breaking the deadlock, hitting the base of the post from a yard in the ninth minute, and City piled on the pressure right up to Gabriel Jesus' disallowed goal in injury-time only for United's 10 men to hold out for a scrappy point.

Jose Mourinho may have been missing the likes of Paul Pogba, Zlatan Ibrahimovic and Juan Mata but in uniting Fellaini, Michael Carrick and Ander Herrera in midfield he appeared to be acknowledging his side were outgunned.

So it proved, as Pep Guardiola's side enjoyed the lion's share of possession and opportunities, though United had chances to dish out an undeserved bloody nose when Henrikh Mkhitaryan and Herrera wasted first-half efforts.