Mata excited by return to Europe 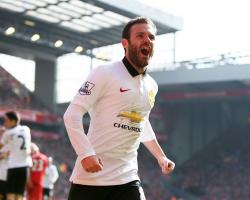 Two years after Mata helped Chelsea win the competition on that famous nail-biting night in Munich, Mata was forced to exit the most glamorous stage in European club football.

Last January he boarded a helicopter and flew to Carrington to complete his ÃÂ£37.1million move to the self-styled biggest club in the world, but there was to be no Hollywood ending to his story as United failed to qualify for the Champions League.

For the next nine months, Mata would invite compatriots David de Gea and Ander Herrera round to his house every Tuesday and Wednesday night to watch the matches on television.

The three amigos were engrossed by what they watched, but there was also more than a hint of frustration too.

"Ander, David and I watched almost every game every week

You watch it but you feel you want to play," the United playmaker said.

"We would watch every Tuesday and Wednesday

The game did not matter - it's the Champions League."

It did not come as a surprise, therefore, that Mata was over the moon when United finished fourth last season.

Provided they get through a potentially tough play-off tie, United will be dining at Europe's top table next season.

And after being starved of European football for a year, Mata is hungry to add another winner's medal to his collection.

"I have been lucky enough to win it

But I am hungry to win it again, for sure," the Spaniard said.

"This club needs to be there

It needs to be fighting for the Champions League.

"Hopefully we can win the play-off, and we can start the season knowing that we are going to play in the Champions League and Old Trafford knows it can enjoy European football."

Louis van Gaal and Ed Woodward realised quickly that the squad needed strengthening to cope with the demands of challenging on two fronts and added four new players before the club embarked upon their pre-season tour of the United States.

Mata thinks each addition will have a big impact at United this season.

Matteo Darmian is a "very tough" full-back who is "very quick and intense," according to Mata, who regards Morgan Schneiderlin as an experienced "very solid midfielder."

Bastian Schweinsteiger "brings experience and quality," Mata says, and Memphis Depay is described as "a talented player who will bring us a lot of skills and goals."

The capture of Depay, Schweinsteiger and Schneiderlin raises questions about Mata's role in the side.

Depay played in the no.10 role Mata prefers in United's pre-season match against Club America in Seattle on Saturday and there are doubts as to whether the Spaniard can play as one of two wide players in a 4-3-3 or 4-2-3-1 formation.

Mata has not spent the last week banging on Van Gaal's door, demanding to know what role he will play this season, though.

"When you play for a top team you always know you have to be at your best level to play," he said.

I train the best I can.

"Between us all we have to help the team but obviously if you play for a team like Manchester United you are always going to have competition.

"I think (the signings) are good for everyone."

As well as the Champions League, challenging for the Barclays Premier League ranks high on Mata's list of priorities.

"That is what we all want," Mata said.

"Last season the important thing was to get into the Champions League.

"Now we need to do one more step forward and try to fight for the title because it is what this club means, fighting for and winning trophies.

"This season we want to win an important trophy

We feel it is what the fans deserve."