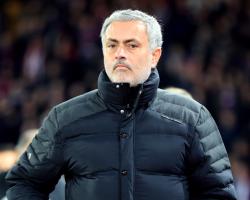 Speculation is mounting as the transfer window edges closer, with Morgan Schneiderlin, Memphis Depay and Bastian Schweinsteiger among those linked with a move away.

Mourinho is again reportedly eyeing a move for Southampton captain Jose Fonte, but the United manager is not expecting a frantic month of transfer activity.

"No, I am quiet and calm and see what happens," he said when asked about incomings

"As I was saying, I would like to keep my squad the same.

"But as a manager I never feel I have the right to stop people to try to be happier and to try to give a different direction for their careers.

"So if the conditions are right for the club and that moment arrives during the month of January, then we will have to react so let's see what happens.

"But if you ask me in this moment, am I waiting for someone to be here on the first of January, or are we chasing some player because on that date we want to have here a new player? Not at all.