Ighalo, who could even have had his hat-trick late on, has now scored three times for United since arriving on a temporary deal from Shanghai Shenhua, and is proving his worth because his presence allowed Solskjaer to rest Anthony Martial from the start. “He should have had a third!” Solskjaer joked to BT Sport after the final whistle.

“When you’ve got strikers you want them to be happy and confident going into the next game and we’ve got a big game on Sunday [against Manchester City].

“We’ve still got a few injuries and Anthony has struggled a little bit lately with some injuries so it’s great to have Odion to call upon and he’s a different type of striker. He holds it up well and he scores. For the first one, the ball’s underneath him, not many strikers could dig that out.” 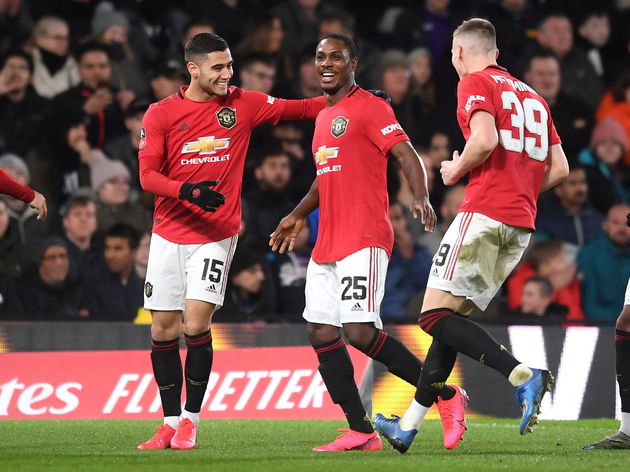 Even prior to kick-off against Derby, Solskjaer had already addressed the possibility of Ighalo staying at United beyond his initial six-month loan.

This is what he said before the game – note the same ‘different type of striker’ line: “He’s here on merit. He’s here because he's a goal scorer and he’s a different type of a striker for us. Of course we might get to the summer and [think] ‘yeah we want to extend this’. Who knows?”

Emphasis on might, but would it be the worst thing in the world? Travelling United fans at Pride Park chanted louder for Wayne Rooney on Thursday night than any player wearing red. The all-time record goalscorer, who netted 253 times during 13 years at Old Trafford, could even have scored against his old side with a late free-kick that was saved.

Had that effort rippled the back of the net to make it 3-1, there is little doubt that United fans would have celebrated a goal being scored against their own team.

“You know that everyone loves him,” Solskjaer reflected. “All the supporters of Man Utd really appreciate what he’s done. And he played well, Wayne showed class. Sometimes he had too much quality and time on the ball for my liking!”

Disappointed to miss out through injury - Working hard to get fit ASAP. Good luck to the lads @ManUtd ❤️ #MUFC

United captain Harry Maguire was absent from the game after suffering an ankle injury. The £80m centre-back could be a doubt for the Manchester derby on Sunday, but Solskjaer is hopeful he will be back in time for the Old Trafford clash.

“He rolled over on his ankle, I wasn’t going to rest him but it’s one of those things that happens in training and we had a few out, but I think he’ll be all right…he’ll be fine,” the United boss said.