Pogba was initially predicted to be out for three or four weeks by manager Ole Gunnar Solskjaer after his January operation, but the Frenchman’s recovery has taken longer than thought. Pogba, who has set up a fundraising effort with Unicef to fight coronavirus, will take part in training on Tuesday, his first full session since ankle the surgery, according to The Athletic.

English football is currently on hold due to the coronavirus outbreak and it is suggested that Solskjaer, who gave his squad the weekend off, will work with Pogba during the postponement to bring the 27-year-old up to speed tactically.

The Athletic cites sources that say Pogba has been putting in ‘real graft’ during his recovery and has already been working with assistant coach Michael Carrick before re-joining the full squad. It is said that the player has been staying at Carrington ‘longer than usual’.

Pogba’s lengthy absence – his injury problems began in August – and his longer than anticipated recovery have only served to fuel speculation over his future at Old Trafford.

Click on the link to help fight the war against #COVID19https://t.co/FTA7936t07 pic.twitter.com/Wbui94Nua4

The player is under contract at United until 2021, a deal that can be pushed until 2022 if the club triggers a 12-month extension clause. It has previously been rumoured that Pogba would be unlikely to sign fresh terms with United, backing the club into a corner where a sale is necessary.

However, it is now increasingly suggested that Pogba does wish to stay and commit.

It was reported last week that Pogba actually ‘sees his long-term future at United and is happy to stay’, paving the way for a possible new contract as a result. 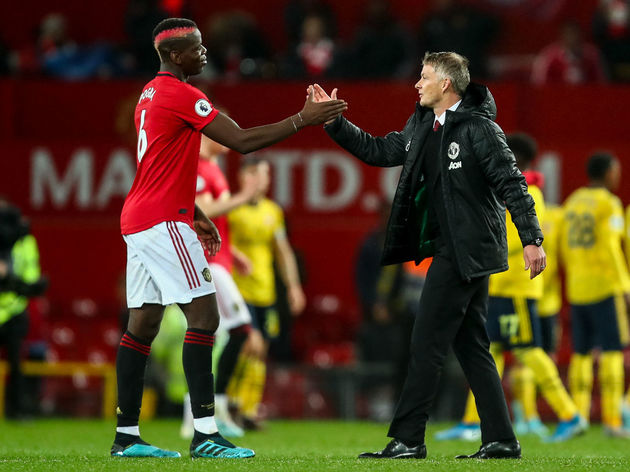 The player himself, bought for a world record £89m in 2016, is said to be ‘determined to prove himself’ and has the belief he can still ‘play a lead role’ in a new era of United success.

There is also the arrival of Bruno Fernandes, which appears to have had an impact. Pogba is said to have been ‘impressed’ by the Portugal international and even thinks he can ‘develop an exciting midfield partnership’ with United’s new creative driving force.

What Is Mino Raiola’s Stance?

Mino Raiola will have a huge role to play in Pogba’s immediate future.

The outspoken agent has rubbed plenty of people up the wrong way, including United boss Ole Gunnar Solskjaer. But he appeared to be trying to bury his war of words with the Norwegian last month and spoke positively to Sky Sports about Pogba staying in Manchester. “In this moment, there are no talks [over Pogba's future]. He is only committed to Manchester United and he respects his contract. Everybody is worried about Pogba leaving, but I am not worried,” Raiola commented.

“We are open for [new contract] talks after he gets back [from injury]. For now, there is a contract and the only thing he is focused on is getting back to fitness.”

In the same interview, Raiola conceded ‘not a lot of clubs can afford’ his client, which came across as an admission that arranging an appropriate transfer would be easier said than done.