​Manchester United midfielder Paul Pogba fears he was actually playing with a fractured ankle earlier in the season, which is why he has struggled with injuries this season.

The Frenchman initially picked up an ankle injury in early September and missed three games in all competitions, but he returned to the lineup to play 90 minutes in a 1-1 draw with Arsenal. He has not been seen since, missing another seven games so far after aggravating the injury. According to ​The Sun, ​Pogba believes that he was actually nursing a fractured ankle when he played against ​Arsenal, which would explain why his injury has taken a turn for the worse ever since.

He is still wearing a protective cast which is due to be removed during the upcoming international break, although he is still expected to miss several more games.

A previous report suggested that, when Pogba's cast is removed, he will need another ​two weeks of specific rehabilitation before ​United can even think about bringing him back to first-team training.

Speaking to ​RMC Sport after watching United fall 1-0 to ​Bournemouth, Pogba admitted he was disappointed not to be able to help his team through such a challenging period.

"I’m gutted," he said. "To see the team lose without being able to play is the worst. I would like to be back to help them but the most important thing is to heal."

United are adamant that they will not rush Pogba, having seen what happened when they tried to call on the Frenchman against Arsenal. 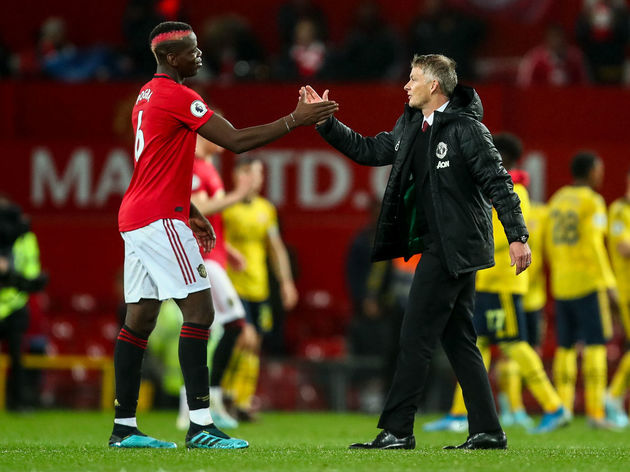 Instead, they are looking to welcome him back in December, with manager Ole Gunnar Solskjaer confirming that Pogba is expected to return ​early in the month.

The Red Devils want Pogba back for their hectic festive period which will begin with a meeting with ​Watford on 22 December. They will then meet ​Newcastle United, ​Burnley and Arsenal in the space of ten days, so having Pogba back would be a huge boost.