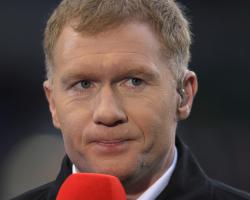 Scholes has been critical of United's style of play under the Dutchman before and pulled no punches on Saturday after the 1-0 victory over the Blades.

I think even Van Gaal on the bench looks bored, but he'll come out and say he's happy

"It wasn't a great performance, will he (Van Gaal) be happy with it? I think he probably will be

I think that's the way he likes to play football."

Scholes added on BT Sport: "We haven't seen anything different now for the last six months, that's the way this team plays football and he'll be happy with the 1-0 win

But they didn't create a chance, had to win a game against a League One side with a penalty in the 94th minute

In my eyes it's not good enough."

Former United midfielder Scholes feels there are too many "square pegs in round holes" in United's line-ups under Van Gaal, citing the likes of Marouane Fellaini, Juan Mata and Anthony Martial as players who are not being utilised in their best positions.

"To just to go through the motions like they did, people need digging out sometimes, it just seems to be accepted

"I'd be depressed (after that game)

"You've just seen 90 minutes of boring, defensive....I've tried to defend this team now for the last two or three weeks, it's getting more and more difficult to do it because every time you come to Old Trafford this is what you see; negative football.

There's so many question marks over the team

"The only thing I can say is I'm glad I don't have to go to Sheffield a week on Tuesday."

Scholes did not go as far as to suggest United need to get rid of Van Gaal, but believes a change in approach needs to be taken with regards to tactics

He said: "(It's) time for a change in style of football, pass the ball to Wayne Rooney! I think he had 34 touches today in the whole game

This is Wayne Rooney, get the ball to your best players.

"I truly believe he (Van Gaal) will be happy with that performance, but I'm not and I don't think there's many fans here (who will be)

How can you possibly be happy with that against a League One team?"

The ex-England man added: "I'd never call for a manager to be sacked

He's got some really good players there

His style of football is not suited to Manchester United's football, but he's going to argue that they've got through, they are fifth in the Premier League and only nine points off the top

And he has got a case for that, but I think fans would rather see a bit more excitement rather than be in those positions."

Owen Hargreaves, another former United midfielder, added: "The performance wasn't what they expected but they got the performance they needed

"It was a really poor performance from Manchester United, lacking in attacking intent and Sheffield United were very unlucky not to get a replay

"I think they'll all be disappointed, they only positive was the result

Only two shots on target, I think everyone will realise that's not good enough."