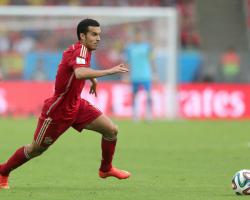 Reports suggest that Manchester United target, Pedro has informed close friends and family that he will be joining the Red Devils this summer

This comes after the Express reported that the player has agreed terms with Manchester and are the club is ready to pay the ÃÂ£22million Barcelona want for the player.

The transition to the Premier League is probably going to be easier for Pedro given the versatility he has developed from his time with Barcelona and the Spanish national team.

One does hope this ÃâformerÃâ La Liga star delivers.