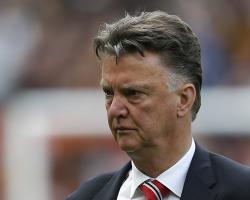 United made a solid start to their defence of the International Champions Cup in the United States with a 1-0 win over their Mexican opponents thanks to a fifth-minute header from new boy Morgan Schneiderlin.

Schneiderlin and fellow debutants Memphis Depay, Bastian Schweinsteiger and Matteo Darmian played well in an otherwise uninspiring game that was not helped by the state of the playing surface at the home of MLS side Seattle Sounders and NFL franchise Seattle Seahawks.

Sounders and organisers of the International Champions Cup - a pre-season tournament which United won last season - held talks before the match about placing a layer of turf on top of the artificial surface at the stadium.

It is not known who made the final call to add the layer of turf, but it was clear that Van Gaal was not happy with the quality of the surface.

"It was not good

It was difficult," the United manager said.

"The first surface is artificial and natural grass over (the top).

"It is always moving

You have seen a lot of players were..

It is not so easy

You can get more and more injuries

It was a big concern."

An official from the Sounders admitted the turf may have been laid before the sell-out One Direction concert took place at the 67,000-seater venue on Wednesday night.

Van Gaal feels organisers of the International Champions Cup have failed to provide adequate playing surfaces for his team for the last two seasons.

"We also played (there) in such circumstances

That is the difference in the USA.

"In American Football that kind of stuff is more important

No One Direction entertainment

That is the difference.

"But in England we live for football

Here they live for American Football, baseball and basketball

The surface was nothing like the ones the Seahawks have provided for United at their training base in Bellevue this week.

"We have been really well received by Seattle Seahawks and also the football club.

The pitches are fantastic

We have to play football on such a pitch

Tonight we could not play on such a pitch

"That is a pity because the ball and the pitch are very important."

Sam Johnstone started in goal for United, who made 11 changes at half-time, as David de Gea was injured.

Van Gaal said the injury to the Real Madrid target was not serious.

"De Gea and (Antonio) Valencia have minor injuries," he said

"We cannot take any risk in the preparation."

There was praise from the Dutchman for Schneiderlin, who looped a header into the far corner of the net in the fifth minute from Juan Mata's cross.

"We have practiced this with him," Van Gaal said

"I was very pleased with the performance

But it is also a fact that Club America don't have many good headers.

"We could know in advance our benefit was there."

On Saturday he played Depay, usually a winger, in the number 10 position just behind Wayne Rooney in a 4-2-3-1 formation

Van Gaal does not seem in a rush to buy a new striker, but Van Gaal also hinted he could enter the market for a forward if he deems it necessary.

"I am not worried about depth of forwards

We still have Rooney

He can play in the striker's position," Van Gaal said.

"We also have Chicharito (Javier Hernandez), (James) Wilson and maybe a surprise, you never know

It is a process

I am not worried about that position."