​Manchester City forward Raheem Sterling has admitted he used to support Manchester United growing up, joking it could be the reason he struggles to find the net against the Old Trafford side.

The 24-year-old has starred in another impressive domestic campaign for City this season, scoring 23 goals in 47 appearances, and featured from start to finish as his side recorded an important win over their city rivals on Wednesday to move back on top of the Premier League. He again failed to do so as City ran out 2-0 winners thanks to goals from Bernardo Silva and Ilkay Gundogan, and he joked as to the reasoning behind his poor record, admitting that he supported United growing up.

Raheem Sterling: "Playing against them [#mufc] in the past and i've had my chances [to score first goal against us], maybe them being my team I supported as a child probably didn't help." #mulive [sky]

"Playing against them in the past, I've had my chances to score," he told Sky Sports, as picked up on by ​Utd Report on Twitter. "Maybe them being the team I supported as a child didn't help."

In any case, it is unlikely to be a cause for concern for either Sterling or City, considering they are on track for a domestic treble.

They won the EFL Cup back in February, and after they booked their FA Cup final place with a victory over Brighton, they are now on track to retain their ​Premier League title. 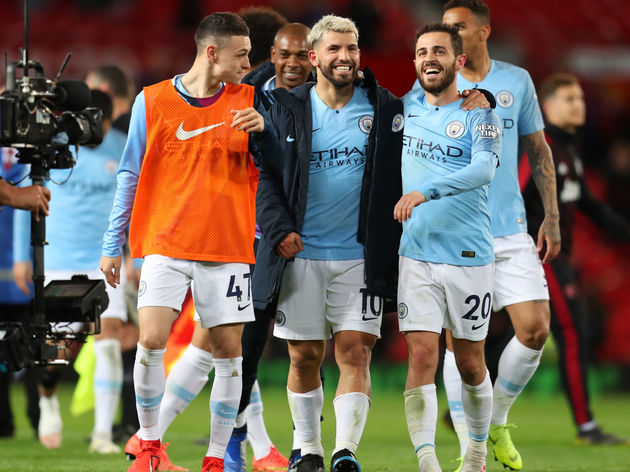 Victories over Burnley, Leicester and Brighton in their remaining league fixtures will make sure of that, but less than maximum points could be enough depending on Liverpool's results in their corresponding fixtures.