Where do you even begin ranking the 10 best seasons for a club that has won 13 Premier League titles? It’s damn hard because every single campaign has its standout highs.

This ranking only covers the domestic league season, so additional success in the FA Cup or Champions League is not included - even though it’s important not to just forget it.

Chances are you won’t agree because each individual fan has their own special memories attached to various seasons for differing reasons. But let’s take a look at Manchester United’s 10 best Premier League seasons, ranked from tenth to first… The 2010/11 campaign doesn’t stand out as being a vintage season on its individual merits. United’s final tally of 80 points is actually the joint lowest of any Premier League champions of the 21st century, equalling the 2000/01 total when the title was won at a canter.

But what it represents is history. This was the club’s record-breaking 19th league title, moving ahead of Liverpool as England’s most successful team and completing what Sir Alex Ferguson had set out to do many years earlier when United had just seven in the trophy case.

There are other reasons for it to be memorable too. This was the season Wayne Rooney scored that overhead kick in a Manchester derby, while Dimitar Berbatov jointly won the Golden Boot. Having lost the 2011/12 title to Manchester City on goal difference with virtually the final kick of the season, Ferguson was even more driven in 2012/13. It is a campaign that is known more than anything for the arrival of Robin van Persie, whose goals were the key.

The Dutchman went on to score 26 Premier League goals to leave City in United’s wake, netting a hat-trick on the actual night the title was won against Aston Villa at Old Trafford - – a milestone 20th to extend the club’s own English record.

This wasn’t a standout side and, Van Persie aside, 2012/13 spoke more about Ferguson’s ability as a manager than it did about the quality of the players in an ageing team. The legendary Scot retired at the end of the season and United haven’t won the league since. This was the big one for United, the season that ended a 26-year league title drought since the days of Matt Busby, Bobby Charlton, George Best and Denis Law.

Eric Cantona arrived towards the middle of the season from Leeds and really kicked United into another gear, scoring a number of crucial goals along the way – the Frenchman later finished third in the 1993 Ballon d’Or behind Roberto Baggio and Dennis Bergkamp. In the summer of 1995, Ferguson sold established stars Mark Hughes, Paul Ince and Andrei Kanchelskis without replacing them, intending to make way for a generation of home grown talent that had won the FA Youth Cup in 1992.

That season started with a 3-1 defeat to Aston Villa and Alan Hansen’s ‘You’ll never win anything with kids’ line. But it transformed into a landmark campaign in the club’s history, including reeling in Newcastle’s seemingly unassailable 12-point lead and the return of Cantona from suspension.

The Frenchman came into his own in the second half of the season and scored in six consecutive games between March and mid-April, while his influence also helped bring out the best in emerging talents like David Beckham and Paul Scholes. United recorded their second highest points tally in a 38-game season in 2008/09, winning a third consecutive Premier League title. But it was eminently more functional than the more exciting campaigns that immediately preceded it – more on which later.

Cristiano Ronaldo started the season injured, Dimitar Berbatov, while immensely talented and a fan favourite slowed play down and sidelined the more vibrant Carlos Tevez. As a result, goals were way down on what they had been, although the overall achievement is not diminished.

The strength of this great side was defensively, with United keeping 14 consecutive clean sheets from November to February. In the title race, they were also able to see off the best Liverpool side of the Premier League era until the current Anfield generation emerged. The 1998/99 season is defined by the historic Premier League, FA Cup and Champions League treble that remains unmatched by any other English club. But even just looking at the Premier League in isolation, it is still a campaign up there with the best in United’s history.

Even though it is the second lowest points tally United have ever won the Premier League with, that team was beaten only three times all season and it represented a huge achievement because of the quality and resilience of the Arsenal side that pushed them all the way.

Rarely have United had to wait until the final day of a season to be crowned champions, but Arsenal were right there until the very end. People still say the Gunners could easily have done a second consecutive domestic double that year had United not gone one better with the treble. The 1992/93 campaign was an important one for Ferguson’s first great United team, but 1993/94 was just better. The team was better, scoring 20% more goals in the process, winning more games and losing fewer than the year before.

It was also the first time United had retained a title since the 1950s and the Busby Babes era, as well as the record points tally for a top flight season since three points for a win was introduced.

Cantona, as excellent as he was in his debut season, stepped up again in his second. The campaign yielded 18 league goals for the Frenchman, the best of his career. Ryan Giggs was on fire, while Roy Keane immediately proved to be worth every penny of his record transfer fee. Never has a United team been more dominant in a league season than in 1999/00 when the treble winners retained their Premier League title, doing so 18 points ahead of the competition.

That was the first time a Premier League club had reached the 90-point milestone in a season, while it also yielded a new record for goals scored and was the earliest title win post-1992.

Despite being unable to match the feats of the treble season in other competitions, partly because of withdrawing from the FA Cup, United were at their free flowing best in the league and finished the season with 11 straight wins, scoring at least three goals in nine of them. 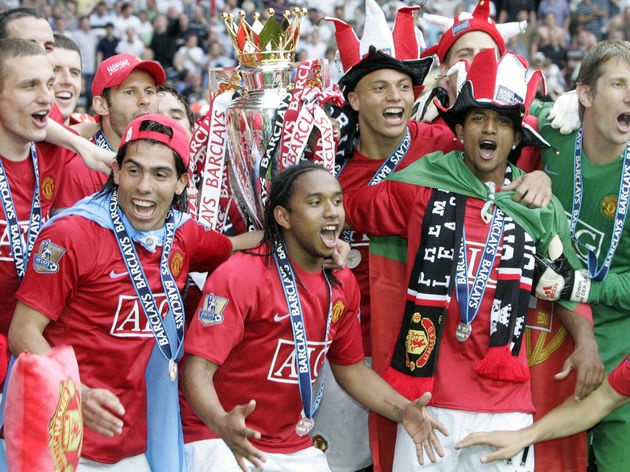 This was the season that Cristiano Ronaldo simply exploded into life, scoring 31 times in the Premier League alone and finishing the 2008 calendar year with the Ballon d’Or and FIFA World Player of the Year award for his stunning achievements.

The Portuguese formed one of the Premier League’s most fabled front lines alongside Wayne Rooney and summer signing Carlos Tevez, while United were also boosted by young signings from Portugal in the shape of Anderson and Nani.

Competition makes for really great seasons and Chelsea were there to once more push United all the way, both at home and in Europe. This season also saw Ryan Giggs break the club’s all-time appearance record, previously held for 35 years by Bobby Charlton. Even though the overall achievements of 2007/08 surpassed it, the 2006/07 campaign was when it all came back together for United, having been in the relative wilderness for a number of years while Ferguson built his third great Old Trafford team.

It was just so exciting and incredibly captivating given that United had fallen so far short of challenging nouveau riche Chelsea for a couple of years.

It was the real birth of the Ronaldo/Rooney partnership, which could have blown up before it even began owing to their World Cup spat. But it was also the emergence of Nemanja Vidic and Patrice Evra in their first full season, with nine United players in PFA Team of the Year.

There was even the back end of Ole Gunnar Solskjaer’s career to celebrate, with the current boss scoring seven times in the Premier League after the best part of three years out injured. Henrik Larsson’s brief loan cameo is another fine memory for fans as well.