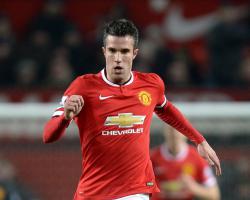 Ferdinand paid a rich tribute to the 31-year-old, who was met by cheering crowds upon his arrival in Istanbul on Sunday night and is expected to complete transfer formalities on Monday.

In a post on Facebook, Ferdinand wrote: "He was actually a better player than I thought he was when he arrived at Manchester United - I had played against him many times vs Arsenal, so I knew he was good but not this good.

"Maybe that was because he was up against me and Vida [Namanja Vidic] though!! On a serious note though, I think that was the general thought through the squad too.

"As a player he is so silky to watch, great touch, can hold the ball up & bring others into play, timings of his runs, skills & a dream of a left foot....oh and he can finish!"

Although there has as yet been no official announcement of the deal, Fenerbahce tweeted a series of photographs on Sunday of the Dutchman wrapped in a club scarf.

The club also posted a number of quotes from the player, who said: "I cannot wait to meet the fans

I am coming to a fantastic and wonderful club

It is a great honour for me."

United have remained silent on the developments surrounding Van Persie's apparent departure since boss Louis van Gaal implied on Friday that talk of the deal was premature.

Asked whether he was looking for a another striker because Van Persie was leaving, Van Gaal said: "When you say that it is not all true.

We don't have the feeling yet."

Van Persie scored 30 goals for United as they won the league in 2012-13 following his ÃÂ£24million move from Arsenal.

His impact since then, however, has been muted due to a series of niggling injuries, and he was limited to 10 goals in 29 appearances under compatriot Van Gaal last season.

Meanwhile, United appear closer to wrapping up the signing of Southampton midfielder Morgan Schneiderlin, with reports last night suggesting he was undergoing a medical ahead of a ÃÂ£24million move.