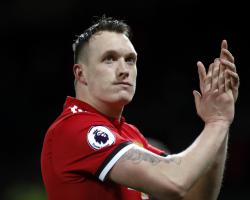 The United striker, who endured a day to forget as United suffered a damaging and demoralising loss to Manchester City on Sunday, sank Bournemouth with a 25th-minute header at Old Trafford on Wednesday.

United were not at their best, and were thankful to David de Gea for repelling the battling Cherries with several good saves, but the result prevented Premier League leaders City stretching their 11-point advantage.

He added: "I think every team, after a defeat, tries not to have a second defeat and that was in the back of their minds when they were playing.

"They wanted to win the match and I could see that from minute one to the last second."

Bournemouth manager Eddie Howe, however, felt Lukaku was fortunate not to be sent off.

Lukaku, whose goal was his first in the Premier League for a month, escaped a booking for a late challenge on Nathan Ake early on

He later received a yellow card for catching Harry Arter from behind.

Howe said: "I thought the first tackle was a yellow card

He was very late on Nathan

Then he picked up a clear yellow

He should have been off the pitch."

United substitute Marcus Rashford hit the bar but otherwise it was Bournemouth who created the better chances.

Howe said: "The players delivered the gameplan really well and we looked like we had a real cutting edge

We created chances right up until the end."

Mourinho later revealed defender Eric Bailly, who has been sidelined since early November with an uspecified injury, could be facing a lengthy lay-off.

He said: "I think it's serious

Mourinho was unable to give further details of the nature of the problem but the club later confirmed it to be an ankle injury.