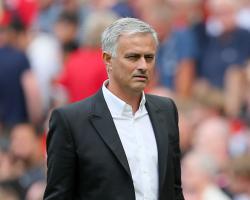 United's ÃÂ£75million record signing struck in each half at Old Trafford to set United on the way to a convincing 4-0 win which was wrapped up in the latter stages by Anthony Martial and Paul Pogba.

After also netting against Real Madrid in the Super Cup last week, Lukaku has begun the season full of confidence and a poor West Ham side certainly had little answer.

"To play in front of such a crowd and for such a great club, it's a dream come true," Lukaku told Sky Sports.

Lukaku finished off a slick move to open the scoring with a powerful finish after 33 minutes and doubled the lead with a header early in the second half.

The Hammers, who were already being outplayed, could not respond and United spurned several more chances before finally adding two more goals in the last three minutes.

Lukaku was denied a hat-trick by a fine block by Pablo Zabaleta and fired another chance over.

Yet while it was former Everton striker Lukaku who grabbed most of the headlines, the platform for victory was laid by an outstanding performance from another new signing, Nemanja Matic.

The ÃÂ£40million midfielder controlled most of the game, leading United's defensive effort and prompting a lot of their attacks

He linked well with Pogba and the overall impression created by United was positive, justifying a lot of pre-season optimism.

"The team did a good job today, everybody was creative," Lukaku said

"The most important thing is the win."

So impressive was Matic's performance that those questioning the wisdom of champions Chelsea to sell have been given much more ammunition.

Manager Jose Mourinho admitted he was surprised his former club sanctioned the move.

He said: "I brought him to Stamford Bridge because I thought he was a player with special qualities and since I left I always thought he could be a perfect player for us.

We have him and we are very happy because he is a player this team needs."

Mourinho was also delighted with Lukaku's performance but claimed the 24-year-old was not under pressure to score goals.

He said: "Romelu knows me well

He knows from me there is no pressure at all

But today he was good, very effective."