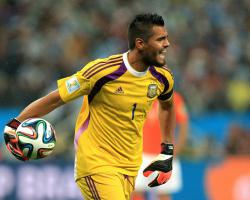 Madrid want to sign De Gea, but United insist they will only do a deal with the 10-time European champions if defender Sergio Ramos comes to Old Trafford in return.

Although such a deal seems unlikely at the moment, particularly with Ramos having been named Madrid captain recently, the situation could change before the transfer window shuts at 6pm on September 1.

Van Gaal has therefore set up a contingency plan by signing Romero on a free transfer.

The Dutchman says it was only logical to sign the Argentinian on a three-year deal given De Gea's future is still unresolved.

"I think that in our circumstances, with the threat that David de Gea is going to Real Madrid, we have to prepare our season and I think Sergio Romero can fulfil that because you have to handle very quickly when it may happen with David de Gea," the United manager said.

He signed the 28-year-old for AZ Alkmaar in 2007 and employed him as his number one for two seasons.

"He is a very good choice," Van Gaal said.

"He is the Argentinian goalkeeper

He has international experience.

"I saw him in the World Cup because he stopped our penalties very good and that is why were not in the final, but I remember him especially from my former time and I know what he can do.

"He is a very dominating goalkeeper

"Of course, he has to learn English because that is also a problem always with a foreigner

I have a lot of confidence that he can fulfil what we are expecting."

If De Gea stays, there is no guarantee Romero will get much playing time.

"I have of course spoken with Sergio and also with David and with me always the best shall be in the line-up so you have to fight and I think in a top club as Manchester United you need always competition," Van Gaal said.

Romero, who was released by Sampdoria earlier this summer, said: "I am absolutely delighted to join Manchester United.

"To play for the biggest club in the world is a dream come true for me."