Roo to play in Ferguson testimonial 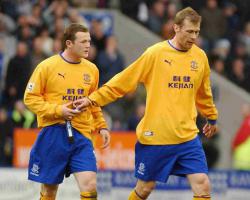 Manchester United striker Rooney and Ferguson were team-mates at Goodison Park in the early part of the last decade before the former left his boyhood club for Old Trafford in 2004.

Ferguson's time with the Toffees will be remembered in a testimonial friendly against Villarreal on August 2 and Rooney, currently out in the United States on United's pre-season tour, will turn out to honour his "hero".

"As a young lad growing up in Croxteth, Duncan Ferguson was a hero of mine," Rooney told www.evertonfc.com.

"As a young player at the club he was an inspiration and when I broke into the first team he helped and looked after me.

Had he not asked me to play I would have gone and supported him on the day as I am sure most other Evertonians will."

In the past Rooney has been subjected to less-than-favourable receptions when returning to Goodison Park as a United player, even kissing his current club's badge in front of Everton supporters in 2008.

However, the hostility has subsided somewhat in recent years and Ferguson spoke of his delight at having Rooney on board for the friendly.

"I'm absolutely delighted that the wee man has agreed to play in the game," added Ferguson, who has not ruled out playing in the contest himself.

"Everybody knows that we go way back

I knew him as a kid, he's a top man and I'm proud as his friend that he's fulfilled the potential we always knew was there.

"Wayne's a world-class player and I'm genuinely thrilled that he will play on the day, just as I'm so grateful to the club for putting on this game."