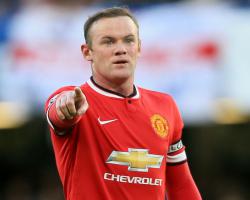 Rooney spent a large chunk of last season in midfield, but manager Louis van Gaal has told the 29-year-old he will be playing up front next term.

The United captain scored 15 goals for the club last season and he is not fazed by the prospect of having to match or better that tally next year.

"It is a position where I think I can score goals," Rooney said.

"Hopefully I can do that

I am ready to take that mantle on and be the one who gets the goals for us."

Van Gaal endured a difficult start to his reign last season, picking up just 13 points from his first 10 matches.

But the Dutchman guided United back into the Champions League and Rooney is hoping the team will kick on this season.

The England skipper believes Van Gaal's much talked about "philosophy" has sunk into the players' minds and that will help United challenge for the title next season.

"At the beginning of last season the manager told us it would take a while to adapt to the changes," Rooney said on the eve of United's friendly against Barcelona in Santa Clara.

"As a group of players you don't think it will, but towards the end of the season, from Christmas, I felt we played some great football, understood exactly what the manager wanted from us and particularly in the big games we did really well.

"We can take that as positives.

We know what is expected of us and what we have to do and are positive and excited for the season."

Van Gaal has spent around ÃÂ£80million on four new signings to help United's push for the title.

As captain, Rooney will do his best to help the quartet settle in at Old Trafford.

The striker will give the new arrivals a history lesson in United and hope that has an effect.

"It is obviously important to help the new players settle in," Rooney added.

"But the ones we have brought in are experienced and successful

I am sure they will add a lot to the team.

"I can try and help them learn about the history of the club and what is expected to be at this club and be successful but it is down to the players themselves to prove themselves and create their own history.

"I am sure they will be great signings."

Of the four new arrivals, Rooney has been particularly impressed by Bastian Schweinsteiger, the German World Cup winner who joined from Bayern Munich for ÃÂ£15million.

"He is obviously a fantastic player

Everyone has known that over the years," Rooney said.

"Since he has joined up with the squad he has been a fantastic person, talking with all the players and the young players too which is a great help to them, having someone of that experience and who is that successful.

"He is a great addition to the team and I feel it will be a very good signing for us."