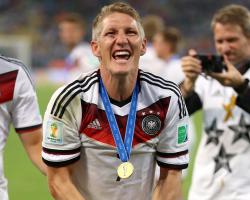 United announced on Saturday they had agreed a deal with Bayern Munich for Germany skipper Schweinsteiger and, according to reports, the 30-year-old midfielder is due to undergo a medical with the club on Sunday.

If the deal goes through then Schweinsteiger will once again link up with his former Bayern manager Louis van Gaal at Old Trafford, and Robson feels the World Cup winner is exactly the sort of player United need.

Robson, 58, told The Sun: "Schweinsteiger is the kind of player and personality United have been short of.

"There is Michael Carrick, of course, who has that same experience and knowledge

When he was not playing last season, we saw that United were not the same team.

"Schweinsteiger is absolutely top drawer and his record and reputation speak for themselves.

"He is the kind of player that can lead United back to the very top."

Robson also believes that Schweinsteiger's age should be viewed as a positive and not a negative, citing the influence that players such as Edwin van der Sar and Robin van Persie had on United after joining later in their careers.

The ex-England captain added: "People will look at his age and question the judgement of bringing in someone who is coming up on 31 but I don't question it at all.

"He is at the right age for what United have been looking for and I believe he can drive the team to new heights because, in Schweinsteiger, United have a true leader of men."

Schweinsteiger, who would become the first German to play for United, would leave behind a sizeable gap in Bayern's squad by leaving the Allianz Arena

He has been on the Bavarian club's books for 17 years and won eight Bundesliga titles, seven DFB-Pokals and the Champions League with Bayern among other successes.

Bayern defender Philipp Lahm told Sport1 television: "It's a pity that our paths are now dividing

We're going to miss him.

"Anybody who knows him knows that he is always looking for challenges so we've got to accept his decision."

Forward Thomas Muller, who has also been linked with a move to United, added: "It's strange that Basti's gone

He's done sensationally for this club.

"He's not going to be forgotten in a rush

I wish him a lot of luck

This is how things work in football."