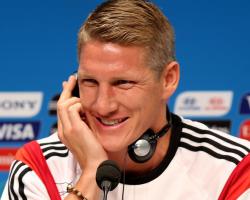 United play the first of four matches in the United States in the early hours of Saturday morning when they face Mexican side Club America.

United landed in Seattle ahead of that International Champions Cup friendly with a spring in their step following the double signing of Schweinsteiger and Schneiderlin.

United confirmed before jetting off to the west coast of America that Schweinsteiger had signed a three-year deal at Old Trafford after ending his long association with Bayern Munich.

''Bastian is the ultimate professional and there is no doubting his talent and his ability to control games," said United manager Louis van Gaal, who worked with the German for two years at Bayern

"He brings a wealth of experience and is an excellent addition to our squad.''

The arrival of Schneiderlin, one of the most impressive performers for Southampton since their promotion to the Barclays Premier League, further improved the mood among United fans who long for their team to challenge for the title next season.

For now, the duo's focus is on settling into life at United

Schweinsteiger and Schneiderlin were all smiles as they got off the team coach at United's hotel in Bellevue, on the outskirts of Seattle, at 5:20pm local time on Monday.

They were joined on the bus by fellow new signings Memphis Depay and Matteo Darmian, who will be looking to play some part in this weekend's friendly at the CenturyLink Field, home of Major League Soccer franchise Seattle Sounders.

After checking into their rooms on Monday evening, the 26-strong United squad left their hotel and undertook a light stretching session at the nearby training ground of NFL side Seattle Seahawks.

Despite weeks of speculation linking him with Real Madrid, goalkeeper David de Gea was with United in Washington.

Robin van Persie was not present, however

The Dutch striker will be unveiled as a Fenerbahce player in Turkey on Tuesday.

Another two notable absentees from United's training party are Rafael and Victor Valdes.

Rafael, who joined United seven years ago, appears to be surplus to requirements following the signing of Darmian from Torino.

Valdes' absence comes as a surprise, particularly when De Gea is the subject of such intense interest from Real Madrid.

Rather than Valdes, manager Louis van Gaal has opted to bring Sam Johnstone and Anders Lindegaard along to the US as backup for De Gea, who has just one year left on his contract.

Marcos Rojo and Angel di Maria are exempt from the tour after their exploits with Argentina in the Copa America this summer.

After taking on Club America, United fly to San Jose, where they will play San Jose Earthquakes and Barcelona before rounding off their tour in Chicago, where they will face Paris St Germain.