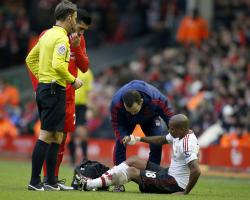 The 30-year-old was forced off during United's 1-0 Barclays Premier League win at Liverpool on Sunday, and the club have now described the injury as 'severe'

Shortly before Van Gaal's Friday lunchtime press conference was due to begin, United announced via Twitter: " Louis van Gaal tells #MUTV Ashley Young has a severe groin injury and will be operated on

The #mufc winger will be out for 'a long time'."