Smalling ready to fight for place 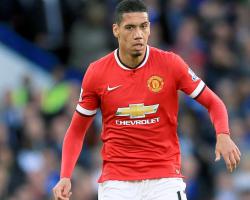 United have told Real Madrid the only way they will sign David de Gea is if they give them Ramos in return.

Ramos is regarded as one of the best defenders in Europe

The 29-year-old has won the Primera Division with Madrid three times, as well as the Champions League

He has also won the World Cup and the European Championship on two occasions with Spain.

Should the Spaniard arrive, Smalling's place in the team would come under threat.

The England centre-half became an established player under Louis van Gaal last season, but does not care if he has to tussle with the likes of Ramos for a place in the team next term.

"There is always competition at Manchester United," Smalling said when asked what effect Ramos' possible arrival could have on his future.

"When I signed there were five centre backs already here.

"I had to work hard to get past them

Smalling has come in for some criticism since he signed for United five years ago.

But the former Fulham defender earned Van Gaal's trust in the final third of last year, starting 12 of the last 13 games, and was rewarded with a new four-year contract.

The 25-year-old is now looking to continue his progression under Van Gaal.

"I hope my performances keep me in the team," said Smalling on the day before United's tour game against the San Jose Earthquakes at the Avaya Stadium.

"Once you set a benchmark it is matter of aiming higher

You cannot afford to drop them

I want to make a good start to the season

After that it will just be a question of kicking on."