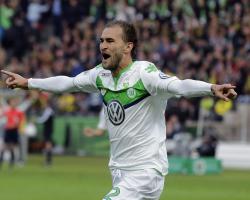 Two whole months remain in which clubs can conduct their business but competition is fierce and some of Europe's hottest targets have already been snapped up.

Manchester United are reportedly considering submitting a near ÃÂ£30million bid for the services of a 29-year-old who has won the Primera Division, the Champions League, and the World Cup

He had already caught the eye of the likes of Arsenal and Manchester City, though, and they will have to move quickly now his profile has been lifted by his exploits in the Czech Republic

The 81-cap Turkey international has been one of the driving forces behind Atletico Madrid's revival, winning La Liga with the capital club and finishing as a runner-up in the Champions League final

Dost has been urged to snub strong interest from Newcastle, whose new coach Steve McClaren - formerly of FC Twente - knows all about the Dutchman's free-scoring days in the Eredivisie

While Newcastle plot their next approach for Dost, down the road Sunderland are said to be closing in on a new attacking threat of their own - Dynamo Kiev's Holland international Lens