​The number seven shirt carries more meaning and history at Manchester United than any other club. The iconic jersey worn by countless Old Trafford legends over the years, to the point where it now carries an incredibly heavy burden for anyone that dares take it on.

A stalwart of the right flank during the 1950s, Johnny Berry was one of only two United players to be a part of all three title winning seasons in the decade. As a traditional winger he was noted for his dribbling and crossing, although he won only four England caps during his career.

Berry joined from Birmingham City for £15,000 in 1951 and was a regular as United won the First Division title in 1952. As the championship winning team was eventually disbanded in favour of the new Busby Babes, Berry kept his place in the side, remaining a near ever present. His maturity and experience would prove vital as the young talents of Eddie Colman, Duncan Edwards and Liam Whelan flourished, winning back to back titles in 1955/56 and 1956/57.

Berry was a survivor of the Munich Air Disaster in 1958, although he had no recollection of the crash itself and was unaware his teammates had been killed until he returned to England after spending two months in hospital. Tragically, Berry had bemoaned the fact that his close friend Tommy Taylor, who had been one of the victims of the crash, had not been to visit, but the doctors treating him didn’t believe he was well enough to cope with news of any deaths.

The injuries he sustained, which included a fractured skull, broken jaw and broken pelvis, ended his playing career at the age of 31. 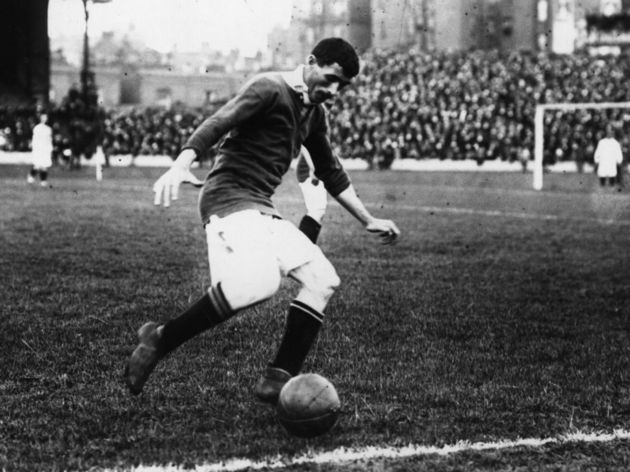 Strictly speaking, Billy Meredith never actually wore number seven for United, nor indeed any digit on his back, as shirt numbers were not introduced to English football until after he retired. But the outside right position he played in – a modern day right winger to you and me – soon became synonymous with seven.

Meredith had originally starred for Manchester City, where he won the 1904 FA Cup, but he was suspended from football for 18 months in 1905 after being implicated in a bribery scandal along with 16 other players – he always vehemently denied the charge against him.

He was one of four City players who then switched Manchester colours to United, making his debut on New Year’s Day 1907 when the ban expired. Meredith was nearly 33 at the time, although he stayed at United until 1921 and still holds the record as the club’s oldest ever player at 46 years and 281 days. After that, he even re-joined City and played on until 1924.

With United, the Wales international won the First Division title in 1907/08, his first full season, and 1910/11, as well as the 1909 FA Cup, which were the club’s first three major honours. 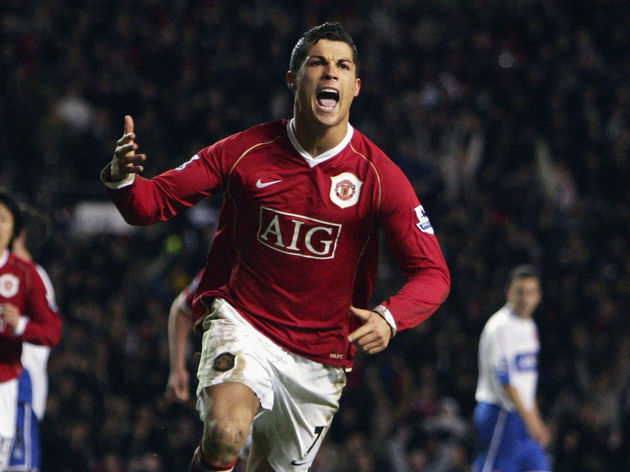 Cristiano Ronaldo is an individual who has achieved everything through much hard work and dedication. With five Ballon d’Or awards to his name and over 700 career goals, he will retire as one of the greatest players of all time, and it was at Old Trafford that he emerged as a superstar.

Ronaldo signed for United aged 18 in 2003 shortly after terrorising his future teammates in a pre-season friendly, although he initially had to be persuaded to take the number seven shirt rather the 28 jersey he wore at Sporting CP. These days, it his personal ‘CR7’ brand.

Initial promise was mixed with inconsistency, but 2006 saw Ronaldo’s career take off. A blossoming partnership with Wayne Rooney paved the way for Premier League glory in 2006/07, followed by a repeat in 2007/08 and a Champions League title – Ronaldo scored 42 goals in the latter and was rewarded as the first United player to win the Ballon d’Or in 40 years.

More world class performances yielded a third successive league title for only the second time in the club’s history and another, albeit unsuccessful, appearance in the Champions League final.

Ronaldo left United for Real Madrid in a world record transfer worth £80m in 2009 and many would argue that his influence and quality was never replaced. At £1.5m, Bryan Robson was a British record transfer when he joined United from West Brom in October 1981. On his debut, the future legend actually wore the number eleven shirt, although he took seven just a few days later in a Manchester derby at Maine Road.

According to Alex Ferguson, he was such a formidable opponent because ‘he never sensed danger’, always putting his body on the line. That attitude and drive was most likely the reason Robson broke, fractured or dislocated 24 bones during his career, but it ensured his lasting place in Old Trafford folklore.

Robson, who remains the longest serving captain in United history at 11 years, would often carry the team on his back and was rewarded for his efforts with three FA Cup triumphs and the club’s first European trophy since 1968 in the shape of the UEFA Cup Winners’ Cup.

By the dawn of the Premier League era, age and injuries were catching up with Robson, but he continued to play a role as United secured a first league title in 26 years in 1992/93, jointly lifting the trophy with Steve Bruce. He remained for a domestic double the next season, at which point he accepted the offer of a player-manager job at Middlesbrough. 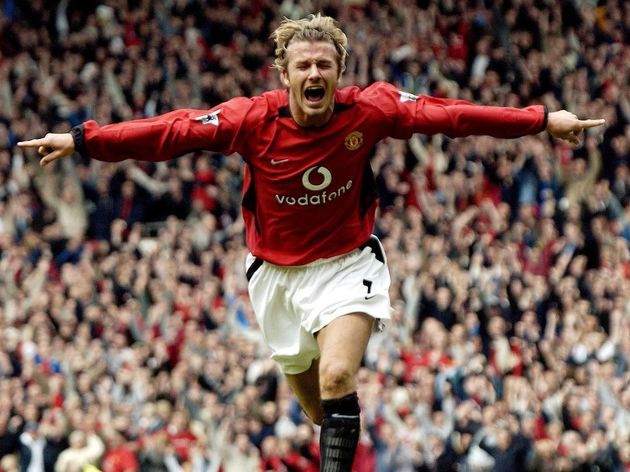 David Beckham announced himself to the world with a stunningly audacious goal from the halfway line against Wimbledon in 1996. By that time, still only 21, he had already won a league and cup double and would be an integral part of the United team for several years to come.

Beckham was lauded for his hard work and determination. His world class set-pieces and crossing ability were the product of hours and hours of extra training, while his work rate on the pitch was second to none. By 1997 he picked up United’s number seven shirt for the first time.

Coming off the back of a red card at the World Cup, turning him into a national hate figure, Beckham’s finest season came in the 1998/99 treble season. He was instrumental for United and finished as runner-up in both the Ballon d’Or and FIFA World Player of the Year awards.

Beckham remained vital as United dominated the Premier League for the next two years, while at international he was made England captain in 2000 and secured his redemption in the eyes of the nation when his injury time free kick against Greece sent the team to the 2002 World Cup.

In 2003, after 10 years in the first-team, Beckham left United for Real Madrid. His football journey would also take in AC Milan and Paris Saint-Germain, while his time with LA Galaxy has changed the face of soccer in North America. 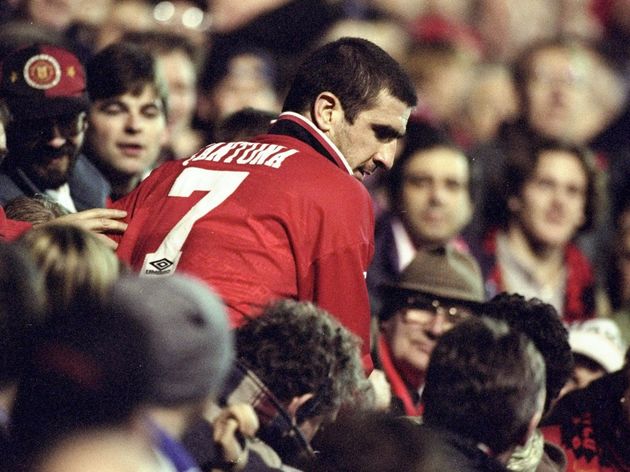 Eric Cantona was a maverick in the truest sense of the word. He had an unconventional passion for poetry and philosophy and played with an arrogance that made him a United legend. Controversy had followed the Frenchman throughout his career and his arrival in England in the early 1990s was mainly as a result of having exhausted the patience of his homeland.

The Frenchman initially trialled at Sheffield Wednesday, then helped Leeds win the First Division title in 1992 and was bought by Alex Ferguson for £1.2m a few months later. His nine league goals were vital as United won the inaugural Premier League and he personally finished third in the 1993 Ballon d’Or, before an arguably even better season yielded a domestic double.

1995 saw the infamous ‘kung-fu kick’ at Selhurst Park and an eight-month suspension, but Cantona’s goals on his return again fired United to another Premier League and FA Cup double. He later became captain and mentored a new group of home-grown talent, but retired aged 30.

Cantona’s legacy went far beyond just his own ability. He was a catalyst to make United great once more and played a vital role in helping develop the class of ‘92. His individual brilliance brought out the best in his teammates and his influence on the likes of David Beckham, Ryan Giggs and Paul Scholes arguably provided the foundations for the club’s continued dominance. George Best wore the number 11 shirt for large chunks of his United career, but the late icon remains most closely associated with seven. It was that shirt in which he enjoyed some of his greatest moments in football, especially at his peak in the mid to late 1960s.

From 1964 to 1972, Best featured in almost every game for United and was the club’s top scorer for six consecutive seasons from 1966. As a teenager and in only in his first full season, he helped United win the league title in 1964/65, the club’s first since the Munich Air Disaster, while he shone in the European Cup the following by individually destroying Benfica in Lisbon.

Best enjoyed further success as United won the league again in 1967 and the ‘Holy Trinity’ with Denis Law and Bobby Charlton became legendary. In 1968, Best was instrumental as United captured a maiden European Cup, capping a season that saw him score 32 goals with a world class performance against Benfica in the final. He won the Ballon d’Or that year as well.

His talent and showmanship on the pitch made Best one of football’s original celebrities, but as his exuberant lifestyle heightened in the early 1970s his football career fell into decline. At the same time, he grew frustrated at United’s deterioration and after a suspension and two premature retirements, Best played his last game for United on New Year’s Day 1974 at the age of just 27. The end of that season would see the club relegated for the first time since 1937.