Maguire scored United’s crucial second goal in the 2-0 win over Chelsea, his first in the Premier League for the club following his £80m summer transfer from Leicester and a very unexpected FA Cup screamer against Tranmere last month. Laurence Maguire, who is a professional player for non-league Chesterfield, posted a screengrab on Twitter of two messages from his famous sibling.

Having been told that set pieces would be a chance for him to get a goal, Harry replied, “Yes I’m going to score around back tonight. Watch [sic].”

He even specified it would be from an in-swinging corner and was, impressively, 100% correct.

Bruno Fernandes, who had earlier struck the post from a free-kick, delivered the in-swinging cross midway through the second and Maguire connected with a flush header.

Right down to the finer detail, his prediction was right as he moved to run to the outside and around the back of marker Antonio Rudiger, although Maguire actually cut back in front of the Chelsea defender when he rose to meet the ball.

By that stage of the game, Maguire was arguably lucky to still be on the pitch after a first half incident in which he appeared to kick out at Michy Batshuayi and strike the Chelsea player in the groin. A VAR review decided no action should be taken.

Maguire later tried to explain away the coming together between studs and testicles, claiming he had used his foot to hold Batshuayi up and stop him from falling on him. 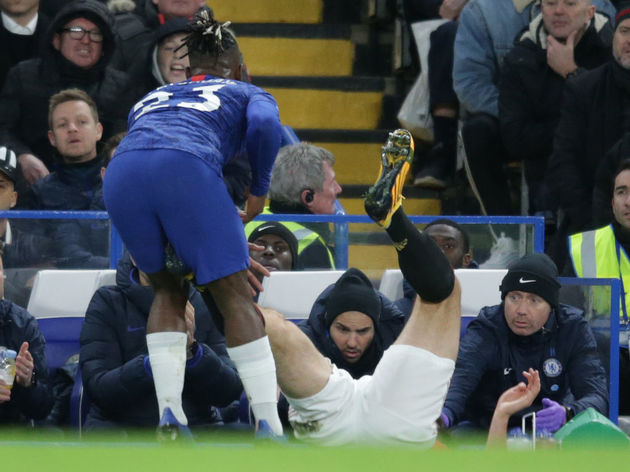 “My natural reaction was to straighten my leg, so if he was to fall on me, to hold him up. Obviously, I've got studs on my boots and it probably looks worse than it was, on TV, but it was just my natural reaction,” the England centre-back told television cameras in the tunnel.

“It wasn’t a kick-out, there was no intent...it was just my natural reaction to straighten my leg, and if he was going to fall on me, to hold him up.”