Manchester United goalkeeper ​David de Gea was back to his best on Sunday afternoon, when he singlehandedly (or, singlefootedly) kept Tottenham at bay to snatch all three points at Wembley.

United went 1-0 up with the perfect counter attacking score; ​Paul Pogba playing a wondrous ball over the top for Marcus Rashford, who took one touch before blasting it into the one place Lloris couldn't cover, his bottom right corner. 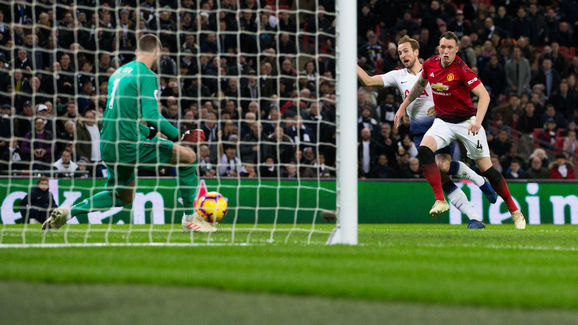 But the ​Red Devils' lead only pushed them further back, as their opponents searched for an equaliser, and this was when De Gea came into his own. The Spaniard made an astonishing 11 saves, the second most he's ever made in a Premier League game behind the infamous display against Arsenal in December 2017, and the outright leader in games when he hasn't conceded.

Naturally, this flung the Twitterverse into a loved-up spin, with fans and photoshoppers alike desperate to get in on the act after yet another Manchester United masterclass from Dave the Save.

From iconic moments of impending doom in history and film, to more pressing matters like Brexit and some bloke's hairline, there's evidently nothing the Spaniard couldn't save. Here's some of the best reaction:

I did a #DeGea edit and he saved it. pic.twitter.com/rUKbbOpN5O

De Gea could have saved the dinosaurs from extinction. pic.twitter.com/blyiu1CP5E

And here come the other witty replies:

With Dave now officially confirmed as the definitive Save, and our everlasting 'Saveour', we will now leave you to get on with your seven Hail Dave's, and any other pious ​De Gea activities you have planned. Good luck, and Dave bless you.