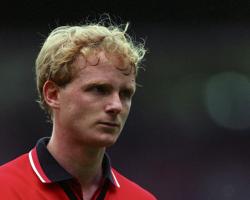 United's fierce rivals have graced Europe's premier club competition just once in the past six seasons, subsequently struggling to break a vicious circle of being unable to attract the type of quality players to enable them to get back into the top-four in the Barclays Premier League.

Ahead of Sunday's clash between the two clubs at Anfield, United's qualification for the Champions League is far from assured as they prepare to make the short trip sixth in the table and five points behind fourth-placed Tottenham.

May, who lifted the Champions League with United as part of the treble-winning squad of 1998-99, feels a repeat of the 2013-14 campaign when David Moyes' men finished seventh is unthinkable and could spark a downward spiral that would be difficult to reverse.

It is so important that United are in the Champions League next season," May told Press Association Sport.

"It is something I worry about

United have to look at what happened to Liverpool and make that doesn't happen.

"I know with all the money in the game these days you can pay way over the odds to make sure you get the top players but would they come without Champions League football?

"Top players want to play in the Champions League

If United miss out, will they be able to attract the likes of (Robert) Lewandowski, Gareth Bale, Thomas Muller, or even Cristiano Ronaldo?

"I think it would be very difficult

And then with all the other top teams strengthening and those just behind improving all the time, it gets harder and harder to get back into that top four."

May thinks signing another striker during the January transfer window would help United's cause.

The 45-year-old said: ``It is definitely something I would love to see us do.

Louis van Gaal got rid of (Robin) van Persie, Chicharito (Javier Hernandez), Angel Di Maria and Falcao and did not replace them.

``We signed (Anthony) Martial, who no one really knew much about, and he has done okay but, God forbid, if he gets injured or Wayne Rooney is out then United are struggling.

``I don't think Van Gaal can rely on such a small group for the rest of the season - but who do you get in? That's the problem.``