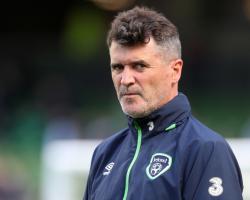 The Republic of Ireland assistant manager admitted his surprise at some of the figures which have been paid this summer, with Paris St Germain forking out a staggering ÃÂ£200million for Neymar and preparing to invest heavily once again in Monaco's Kylian Mbappe.

However, it is the prices which have been paid for players lower down the food chain which have surprised Keane.

He said: "It's mind-boggling, the figures that are out there - especially for the average players

Average players are going for ÃÂ£35million

"I don't really analyse it too much, but that's the market place at the moment

There aren't many top players out there

The really big players are going for big money and it's filtering down now.

"When average players are going for ÃÂ£30-40million, it does make you scratch your head

But if the clubs are prepared to pay that, then it's not the players' fault."

Asked what Van Nistelrooy would cost now, he replied with a smile: "Ruud would certainly be worth in the market now probably a billion."

Asked further how much he himself might cost nowadays, he answered: "ÃÂ£3.75million, I think."