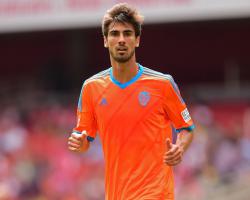 Real Madrid and Barcelona have joined Manchester City in the race to sign Schalke midfielder LEROY SANE, according to the Daily Mirror

However, the Bundesliga outfit have slapped a ÃÂ£40m pricetag on their prize asset.

The Evening Standard writes that NIKICA JELAVIC is on the verge of leaving West Ham with Chinese Super League club Guangzhou Evergrande leading the chase as the Hammers look to free up funds as they eye moves for Leeds right-back SAM BYRAM and Juventus striker SIMONE ZAZA.

The 22-year-old Portugal midfielder is also attracting interest from Napoli and Juventus.

Chelsea defender BRANISLAV IVANOVIC has agreed a new one-year contract with the Blues, according to The Sun

The 31-year-old full-back had received offers from Inter Milan and Fiorentina but has elected to stay in London.

And finally, the Daily Mirror reports that Tottenham chairman Daniel Levy will not allow ANDROS TOWNSEND to leave the club on loan

The England winger has fallen out of favour at White Hart Lane but Levy wants a permanent deal and is looking for a fee of ÃÂ£14m.