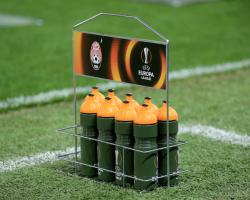 UEFA has opened disciplinary proceedings against Zorya over the setting off of fireworks, throwing of objects, pitch invasion and the blocking of stairways following Thursday night's game in Odessa.

A firecracker had landed worryingly close to United goalkeeper Sergio Romero during the opening 45 minutes and visiting boss Jose Mourinho, who was otherwise complimentary of the home support, had insisted Zorya did not deserve to be fined for their fans' actions.

"'The support was beautiful and they don't need that to make it more beautiful,'' Mourinho said after the match.

''They just make it dangerous for the goalkeeper, so they don't need that.

''The stadium was beautiful, the support was good

Manchester United fans in the top were good too, we just don't need these things.

''Maybe UEFA is not happy and maybe UEFA now takes some money from Zorya, which I think Zorya doesn't deserve.'