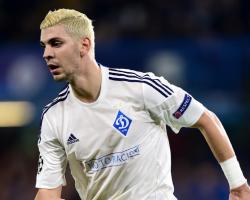 There has been much talk of United finding the right balance and a January acquisition of Austrian centre-back Aleksander Dragovic could provide a stronger link from defence to attack.

The report this time comes from Sport Mediaset who claim the ÃÂ£15.8m transfer is just Ãâhours awayÃâ from completing.

Dragovic won the Austrian Cup in 2008-09 while at Austria Wien, the Swiss Super League three times with Basel and the Ukranian Premier League and Cup with Dynamo Kyiv

The defender signed a 5-year contract with the Ukranian side in July 2013.

Wayne Rooney warned the team in the wake of the pulsating 3-3 draw with Newcastle that they cannot afford to keep conceding three goals every game and that they need to find a better balance between defence and attack.

If Manchester United were to complete the signing they would gain a tough-tackling centre-back who could become the next Nemanja Vidic.